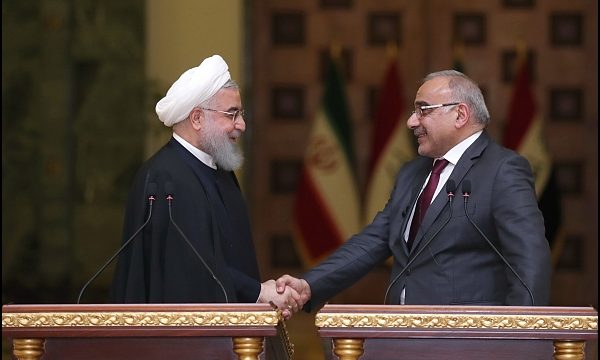 Iran, Iraq stress in a joint statement: Firm resolve to implement “Treaty Concerning the State Frontier and Neighbourly Relations of Iran and Iraq”

President.ir – The Islamic Republic of Iran and the Republic of Iraq issued a joint statement and stressed development of relations between the two countries in all fields of mutual interest.

In the statement that was issued during the official visit of President Hassan Rouhani to Iraq, warm welcoming of Dr Rouhani by Iraq was described as the indicator of the depth of close relations between the two countries in all fields of mutual interest.

In another part of the statement, it read, “The two sides held important dialogues in a brotherly, friendly and constructive atmosphere and expressed their willingness to develop political, security, economic, health, trade, cultural, scientific and technological fields”.

“The two sides also discussed a number of regional issues, common challenges, fighting terrorism, cooperation for strengthening security and stability in the region and establishing economic cooperation that are to the benefit of regional interests and welfare of the peoples of the region”.

It also read, “The two sides also stressed their firm resolve to combat terrorism and organised transnational crimes that pose threats to security and peace of the region”.

The statement continued, “The two sides also discussed issues of interest and signed memoranda of understanding in oil, trade, health, rail transportation between Shalamcheh and Basra, as well as issuing visas for tradespeople and investors of the two countries”.

The statement also read, “The two sides agreed that tourism, pilgrimage and commerce visas will be free of charge for the citizens of both countries starting from April 1, 2019″.