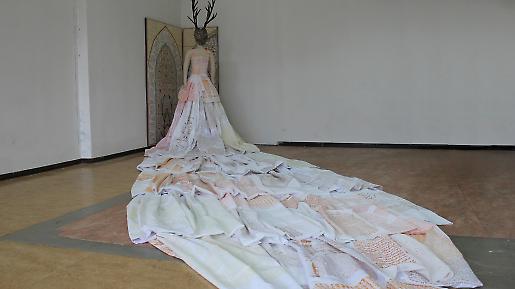 Do clothes make the woman? An Iranian artist’s search for identity

Al Monitor | Zahra Alipour: “Which of these faces is the real me as an Iranian woman?”

That is the question the Berlin-based artist Mona Hakimi-Schueler posed more than a decade ago with a series of self-portraits depicting her in 20 different outfits ranging from a sundress to a chador. The paintings were inspired by debates in Germany over whether female teachers should be allowed to wear headscarves in classrooms.

“I used to wear a headscarf, back in Iran,” Hakimi told Al-Monitor. “I thought and wondered which of my faces was the manifestation of my real identity as an Iranian woman.” The self-portraits of the veiled and unveiled and variously attired artist, painted from photographs, served as Hakimi’s introduction to the German art scene.

The Tehran-born Hakimi had studied physics before moving to Germany in 2001 to study art and art education, earning a master’s degree from Osnabrueck University in 2006. Hakimi’s artistic style has changed and developed over the years, but one constant has been her preoccupation with the question of identity in general and as an Iranian woman in particular.