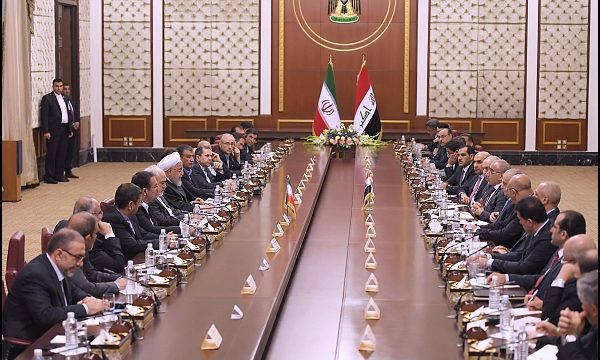 President.ir – President of the Islamic Republic of Iran referred to the developing relations and cooperation between Iran and Iraq and said, “The authorities of the two countries should make efforts to further cement relations between Tehran and Baghdad”.

Speaking at the meeting of high-ranking delegations of Iran and Iraq on Monday, President Hassan Rouhani said, “Iran-Iraq relations have roots in history and have always been friendly and brotherly”.

“At the time when the United States is seeking to pressurise the Iranian nation with its unjust, illegal sanctions against the regulations of the Security Council, we need to develop and deepen our relations to stand against them,” he said.

He continued, “Iran and Iraq can cement ties and cooperation in different fields such as science culture, biotechnology, technology, nanotechnology, and academic relations”.

On transit and transportation, he said, “Linking Iraq’s railway to Iraq, which is connected to the Central and Eastern Asian countries because of the North-South Corridor, can have a great effect on trade and economic relations in the region”.

We are ready to increase energy exports to Iraq, said Rouhani, adding, “The authorities of the two countries should make efforts to accelerate the implementation of agreements in environment and dust”.

He also mentioned banking relations and using national currencies of the two countries in trade relations, as well as restoration of Arvand Rud.

On terrorism, Dr Rouhani said, “The Iranian nation and government have been alongside the people of Iraq in their fight against terrorism, and will stand by the Iraqi government and nation during the reconstruction process”.

Prime Minister Adil Abdul-Mahdi of Iraq said in the meeting, “We have always had common interests and today, we feel that relations between Iran and Iraq are becoming stronger day by day”.

“We are determined to deepen ties with Iran in all fields of mutual interest,” he said, adding, “We should turn the region into the stage of cooperation and friendship among friendly, neighbouring countries”.

He also went on to appreciate the Iranian nation and government’s support of the Iraqi nation in their fight against terrorism.