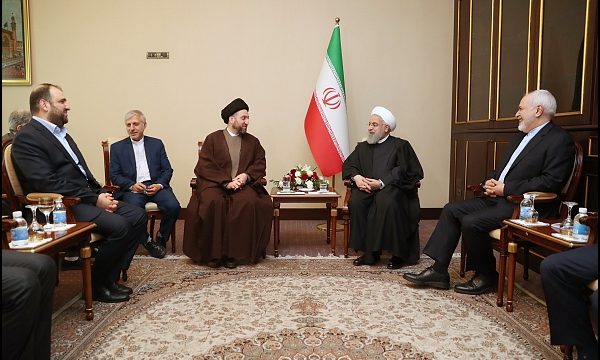 Iran to continue its role in resolving regional problems, promoting interaction among countries

President.ir – President stated that Iran and Iraq play an important role in the region, adding, “We should plan based on conditions, causes and goals of the two nations and take steps for deepening Tehran-Baghdad relations and cooperation”.

Speaking with the Leader of National Wisdom Movement of Iraq Sayyid Ammar al-Hakim on Tuesday, Dr Hassan Rouhani said, “We should attempt to carry out our responsibilities towards the two nations well”.

Major world powers, especially the USA have always sought to hatch plots against the peoples of the region, he said, adding, “The Islamic Republic of Iran is ready to continue its role in resolving regional problems and promoting interaction among countries”.

Leader of National Wisdom Movement of Iraq Sayyid Ammar al-Hakim said in the meeting, “Today, Iraq has been able to overcome great challenges and get on the track of reconstruction and development, for which stronger relations with Iran can be effective”.

“We consider it our duty to stand up to the greed and propaganda of major world powers against the Islamic Republic of Iran,” he said.