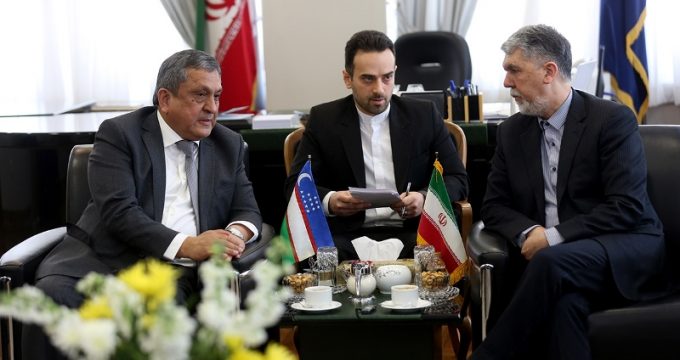 IRNA – Minister of Culture and Islamic Guidance Seyyed Abbas Salehi said on Sunday that Uzbekistan’s Center for Islamic Civilization will provide many opportunities for cooperation between Iran and Uzbekistan.

In a meeting with Head of the Center Shaazim Monavvarov, he hailed long-standing ties between the two countries, saying that during the Islamic Renaissance from the ninth to 12th century, Uzbekistan was its heart in Central Asia.

He also underlined the need for promoting collaboration in various fields including cinema, music, publishing books and manuscripts.

Stressing the necessity for dialogue among the two countries’ elites, he said that the discussions can deal with ways to counter terrorism and extremist views and defending global peace.

Monavvarov, for his part, said that the center aims to safeguard works of the scholars, noting that his country is ready for exchanging artistic and cultural works.

Referring to cultural and artistic commonalities of the two countries, he added that they can have further cooperation in various domains, including cinema, music and calligraphy.

“Our country has currently adopted open policy in its foreign policy, especially with neighboring states,” he said.