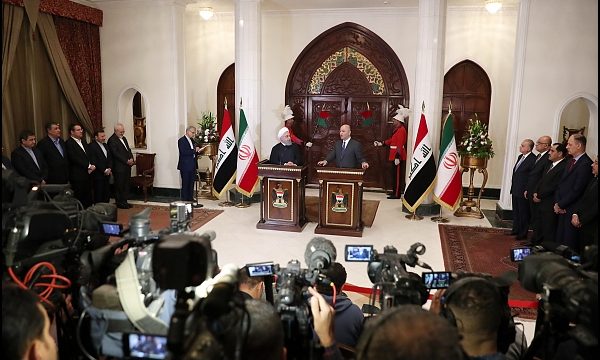 Rouhani seeks to shore up Iran’s influence on Baghdad trip

Reuters  | John Davison, Babak Dehghanpisheh: The first Iranian presidential visit to Iraq since 2013 is also meant to signal to President Donald Trump’s administration that Tehran retains its influence in much of the region despite U.S. sanctions.

“Iran and Iraq are neighbors and no country can interfere in their relations,” Foreign Minister Mohammad Javad Zarif said after arriving in Baghdad to prepare for the visit.

Rouhani made clear last week the debt he believes Baghdad owes Tehran for support in the battle to defeat Islamic State. Iranian forces and the militias they back played a crucial role defeating IS in Iraq and Syria.

“If the support of the Islamic Republic of Iran didn’t exist then Baghdad and the Kurdistan region would have definitely fallen and Daesh (Islamic State) would dominate the region,” he said in comments published on his official website.

Iran mostly relies on other senior officials to conduct its dealings with Iraq, with which it shares an almost 1,500 kilometer (900 miles) long border. Most prominent of these has been Revolutionary Guards commander Qassem Suleimani, who was instrumental in directing the battle against Islamic State in Iraq and Syria.

But as it tries to counter the pressure from U.S. sanctions, Iran is seeking to shore up its political and economic influence along a corridor of territory it effectively controls from Tehran to the Mediterranean through Iraq, Syria and Lebanon.

“Tehran and its allies in Baghdad and Damascus achieved victory in the war against the Islamic State but the Islamic Republic risks losing the peace,” said Ali Alfoneh, senior fellow at the Arab Gulf States Institute in Washington.

“Apart from Russian companies, UAE companies are aggressively trying to gain a foothold in Iraq and Syria, which would deprive Iranian companies of reaping the fruit of their war era effort.”

Iran’s influence in Iraq will be difficult to dislodge, however. Through allied Iraqi politicians and paramilitary groups, it emerged as the dominant force after the U.S.-led invasion that toppled Saddam Hussein in 2003.

Iran officially has no military presence in Iraq but backs its most powerful Shi’ite paramilitary groups. An umbrella grouping of all Iraq’s Shi’ite militias is estimated at 150,000 fighters.

Last week Washington blacklisted another Iran-backed militia that has helped create a supply route through Iraq to Damascus. The United States has around 5,200 troops stationed in Iraq.

Tehran also has powerful allies in Iraq’s parliament whose attempts to pass a bill forcing U.S. troops to leave the country might be aided by Trump’s belligerent anti-Iran rhetoric – especially comments roundly derided by Iraqi leaders that U.S. forces in Iraq, ostensibly there for the battle against Islamic State, can be used to “watch Iran”.

Nevertheless, Washington’s strategy has caused some friction between Iraq and Iran. Last month Iranian Oil Minister Bijan Zanganeh criticized Iraq for failing to pay a $2 billion debt for energy imports as a result of compliance with the U.S. sanctions regime.

Meanwhile, Gulf Arab states including Iran’s arch-foe Saudi Arabia have made overtures to the Iraqi government for energy and other economic deals, although with limited success.

Iran and its Iraqi allies also face the challenge of popular discontent over its dominance – not only in northern Sunni areas where Shi’ite militias have deepened their control, but even in southern Shi’ite heartlands.

Protests that broke out across southern Iraq last year over lack of services took up anti-Iranian slogans, and demonstrators stormed the Iranian consulate in the city of Basra.

“There are growing tensions in predominantly Shi’ite provinces which at one point were assumed to be pro-Iranian,” said Renad Mansour, research fellow at Chatham House.

“Part of their frustrations are targeted towards Iran and the Islamist parties that Iran supports … for Iran, the priority in Iraq is for it to remain stable and for their interests to be ensured.”