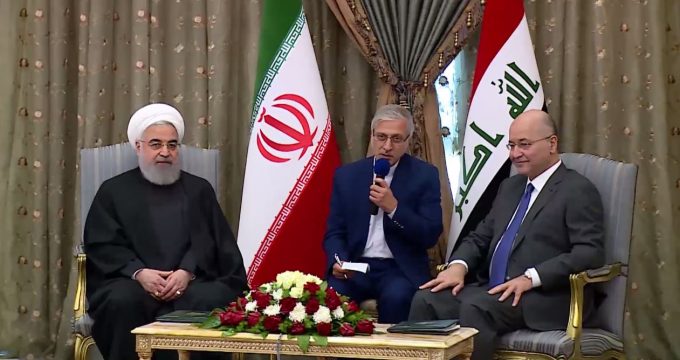 President in a meeting with his Iraqi counterpart: Iran favours a secure, independent, developed Iraq

President.ir – Presidents of the Islamic Republic of Iran and the Republic of Iraq referred to the friendly, brotherly and developing relations between the two countries and stressed more efforts by the authorities to further deepen bilateral, regional and international Iran-Iraq relations.

In a meeting with President Barham Salih of Iraq on Monday, President Hassan Rouhani appreciated the hospitality of the Iraqi government towards the Iranian delegation and expressed hope that the visit would further develop relations between the two countries.

Stressing that the two countries have proved good neighbourliness and brotherhood towards each other in different fields, he said, “The Islamic Republic of Iran, in its entirety, is determined to further develop relations with Iraq”.

“Close Tehran-Baghdad relations is what our nations want,” said Rouhani, adding, “Iranian scientists and religious leaders have always been alongside each other and the Najaf and Qom seminaries have been the cradle of many great religious authorities”.

On the importance of deepening banking relations, he said, “Supporting the central banks of the two countries and trade with the use of national currencies will eliminate the need for foreign currencies”.

“Iran and Iraq can develop their cooperation and relations in different fields, such as energy, transportation, transit of goods, taking better advantage of Arvand Rud and linking the railways of the two countries to each other,” said the President.

He also went on to refer to border markets and industrial parks at the border of the two countries, adding, “We are ready to transfer our experiences and technical and engineering services to Iraq”.

Iran has always favoured a secure, independent and developed Iraq, said Rouhani, adding, “Fighting terrorist must continue until they are fully rooted out and Iran is ready to actively participate in Iraq’s reconstruction”.

“The message of this visit is that no bureaucracy and third country can affect the amicable, brotherly relations between Iran and Iraq,” said the President.

President Barham Salih of Iraq also said, in this meeting, “We consider the Iranian nation our own family and Iran our second country”.

Stating that Iran has welcomed many Iraqis in critical points, and supported the country in fighting terrorists, he said, “Iran has had a very remarkable role in defeating ISIS”.

“We will never forget Iran’s brotherly backing of Iraqi people in hard days and we will stand by the people of Iran as well,” he continued.

The President of Iraq also welcomed development of relations between the two countries in different fields, including railways, tourism, the environment, industry, mining, and scientific and cultural cooperation.