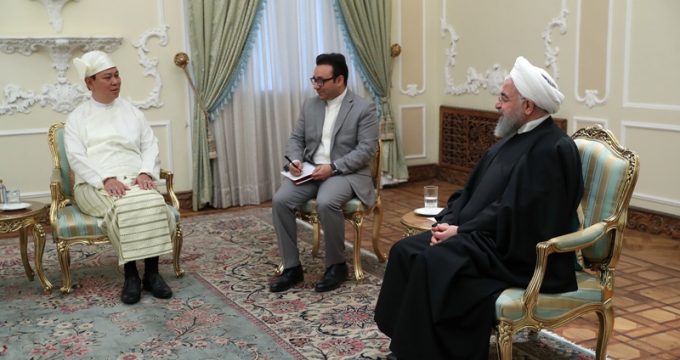 IRNA – Iran’s President Hassan Rouhani said on Saturday that Tehran was ready to help restore security and stability in Myanmar so that displaced Rohingya people could return to their homes.

Receiving credentials of Mukyu Ung, Myanmar’s new Ambassador to Tehran, President Rouhani expressed hope that the efforts made by Myanmar’s government would bear fruits, the stability and security would be resorted in the country and the ground is set for the return of the refugees to their country.

‘We are ready to cooperate on the issue,’ he said.

Over 1.3 million Muslim Rohingya refugees have been displaced as a result of violent racist attacks in Rakhine State in Myanmar since August 2017.

Many refugees have fled to the neighboring country, Bangladesh.

‘Security and stability in every country are reached through cooperation with all ethnic groups in those countries,’ he noted.

Emphasizing the high potentials of Iran and Myanmar for cooperation, the Iranian president said the two countries can use the potentials for boosting cooperation in various fields, including engineering, investment, trade and tourism.

The Myanmarese ambassador for his part echoed Iran’s president view, and said that Naypyidaw has taken all measures required for the return of the Rohingya refugees.

He also referred to the memoranda of understanding signed with Bangladesh and UN agencies.

‘We are ready for receiving refugees, and have made all economic and social arrangements for their return,’ he said.