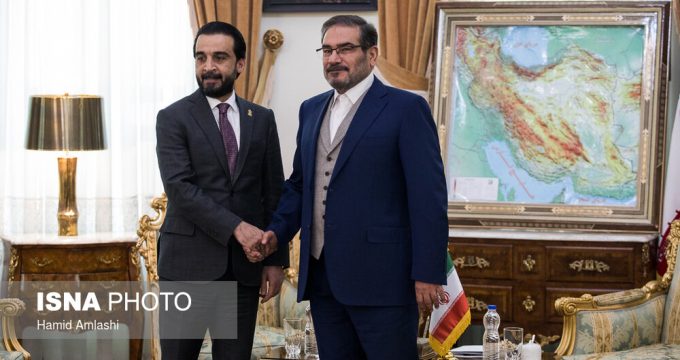 US employs all capabilities to manage terrorism as useful tool

MNA – Secretary of the Iranian Supreme National Security Council Rear Admiral Ali Shamkhani has said the US has spared no efforts to manage terrorism as a useful instrument.

Rear Admiral Ali Shamkhani made the remarks in a meeting with visiting Iraqi Parliament Speaker Mohammed al-Halbusi and his accompanying delegation on Wednesday.

Shamkhani said in the meeting that the expansion of regional, economic, and security cooperation between Iran and Iraq was a strategic opportunity for the security of the region and for the development of the two countries, adding “the development of all-out cooperation between Iran and Iraq by designing and implementing effective programs in different economic, commercial and energy fields could create peace and prosperity for the people of both countries.”

The top Iranian security official further referred to the Arbaeen Procession, saying that he religious ceremony deepens the cultural ties between the two nations.

Shamkhani further described the presence of US troops in the region as a long-term threat to democratic governments, which rely on their internal power and oppose dependence on foreign powers, stressing “the costly experience of ISIL’s invasion of Iraq showed that, the United States not only does not protect people and governments against terrorist elements at the time of crises, but also employs all its capabilities including its weaponry and intelligence capabilities to manage terrorism as an instrument.”

He further described the upcoming visit of Iranian president to Iraq as a historic opportunity to make the final decision on the border, legal and economic files between the two countries, pointing out that “through joint efforts undertaken in recent years, a set of mechanisms and infrastructures have been set up to create mutually beneficial economic cooperation between the two countries.”

The speaker of the Iraqi parliament, for his part, noted that Iran plays an important role in creating security and stability in the region, noting that the defeat of Takfiri terrorism was impossible without the presence and active role of Iran.

He further noted that unbreakable ties between the two nations, which are based on the religious and cultural similarities and the willingness of the leaders of the two countries have created joint interests for both countries.”