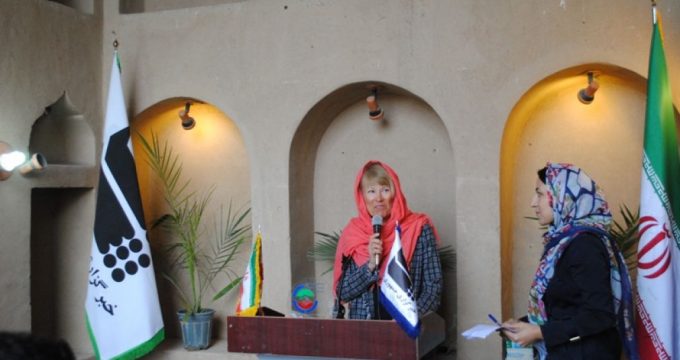 United Nations Iran – An Exhibition of Historical Photos and Documents on UN-Iran Partnership was inaugurated by UNIC Director, Dr Maria Dotsenko and Friday Prayer Leader of Dezful, in the Khuzestan Province, Hojjatoleslam Seyyed Mohmmad Ali Qazi-Dezfuli at the Historical House of Tiznou in Dezful on 28 February 2019.

Addressing the participants, Dr Dotsenko thanked IRNA, Ministry of Foreign Affair’s Center for Documents and History of Diplomacy, UN archives and Institute for Iranian Contemporary Historical Studies for providing these photos and documents.  She also thanked the provincial authorities for their support.

The exhibition was organized in Dezful by IRNA News Agency in the framework of the cooperation between UNIC and IRNA with the support from the Provincial authorities.

“These photos and documents show that Iran has been always active in foreign affairs and invested efforts to promote international peace, security and multilateralism. Iran was among 51 UN founding Member States in 1945 and is actively engaged today in strengthening the UN”, she said.

UNIC Director pointed out that the visitors would see many historical moments that are captured on photos and documents such as Dr Mustafa Adl, Head of Iranian Delegation signing the UN Charter on June 26, 1945, Ambassador Nasrollah Entezan of Iran unanimously elected as the President of the 5th session of the UN General Assembly, documents and photos related to the various activities of UN where Iran played and keeps playing an important role.

“Today some 18 UN specialized agencies, funds and programmes are working in the Islamic Republic of Iran on the invitation of the Iranian government in close cooperation with our national partners for the benefit of Iranian people”, she said adding that so far seven of the UN Secretaries-General have visited Iran whose pictures are on display at this exhibition. These and some other photos were provided by IRNA.

Dr Dotsenko highlighted appreciation of fruitful cooperation between UNIC and IRNA and support of Provincial authorities.

The exhibition was already shown in Shiraz, Bushehr, Khorramabad, Arak, Zahedan, Sanandaj, Yazd, Tabriz, Kermanshah and Kerman in the framework of this UNIC-IRNA partnership project.

A large number of people from all walks of life as well as local government officials and academicians visited the Exhibition of Historical Photos and Documents on UN-Iran Partnership in Dezful. UN informational materials in Persian language were distributed to the exhibition visitors.

UNIC Director also spoke at the 2nd Gundi Shapur International Congress, held at the Gundi Shapur University which is among the oldest universities in the world and discussed possible cooperation with the University.  She highlighted crucial role of education for peace, sustainable development and human rights.

The purpose of the Congress was to commemorate registration of Gundi Shapur University as the world heritage.

This high-profile Congress was attended by more than 300 researches, scientists and students from Iran and other countries, including Armenia, France, India, Italy and diplomats from the French Embassy.

UN promotional materials were distributed at both events.