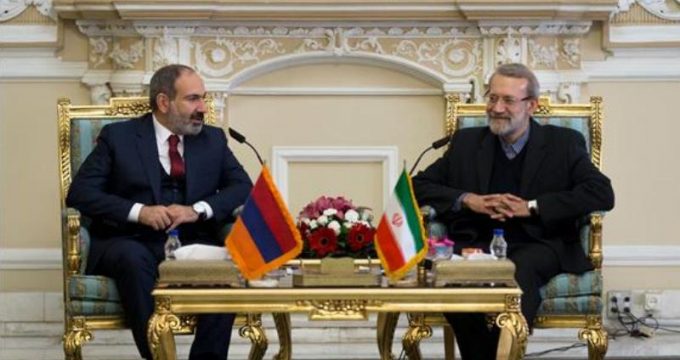 IRNA – Iranian parliament speaker and the Armenian prime minister underlined development of all-out ties, in particular in the parliamentary field.

Iran and Armenia have good capacities for development of their cooperation in the fields of transit, energy, tourism, banking and academics, Ali Larijani said in a meeting with Nikol Pashinyan.

He said that Eurasian Union (EAU) has good capacities for development of bilateral economic cooperation.

In the meantime, the Armenian prime minister, for his part, welcomed development of economic relations with Iran.

He expressed the hope that his visit to Tehran opens a new page in the two countries’ relations.

The Armenian prime minister is visiting Iran upon an official invitation from Tehran.

Promoting bilateral relations in various fields is one of the pivotal topics of talks between Pashinyan and Iranian officials.

The Armenian prime minster arrived in Tehran on Wednesday morning and was welcomed by Iran’s Minister of Energy Reza Ardakanian.