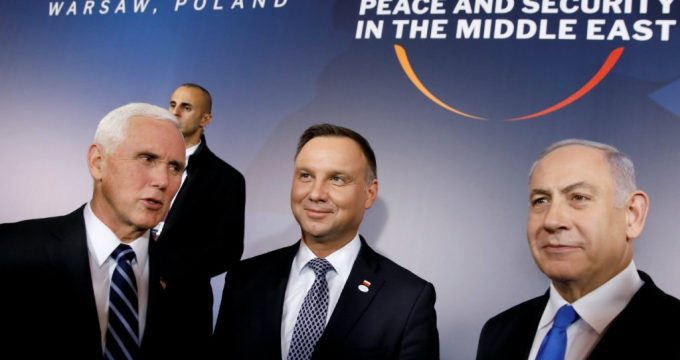 Israel, not Iran, is a threat!

The Express Tribune | Dr Moonis Ahmar: The US-dominated Warsaw conference on ‘Peace and Security in the Middle East’ held last week was more on isolating Iran than focusing on the real threat to peace and security in the region i.e. Israel.

The Iranian president while commenting on Warsaw conference rightly observed, “We see what’s happening in Warsaw. It’s an empty result, nothing.”

Forty years ago, the outbreak of anti-American and anti-Shah Iranian revolution, which dismantled the two-pillar policy of the US in the Persian Gulf, led to far reaching geopolitical changes in the Middle East and Central, West and South Asia.

From a pro-American state, Iran took a 180 degree shift and became anti-US while also pursuing an anti-Israeli policy. Iran survived the US-led campaign to topple the revolutionary regime and emerged as what is perceived as a major threat in the Gulf region.

From any standpoint, it is Israel and not Iran which is a threat to the Arab and the Muslim world. Unlike Israel, which has annexed Golan Heights, East Jerusalem and occupied West Bank and besieged Gaza, Iran is not involved in acts of aggression.

Israel has refused to comply with the UN Security Council resolutions 242 and 338 which were passed after the June 1967 and the October 1973 Arab-Israeli wars, calling upon the Jewish state to withdraw from the occupied areas. Then why is it so that the focus of Arab Gulf countries, Egypt and Jordan is not to liberate Arab areas from the Israeli occupation but to confront Iran?

The bashing of Iran has caused enormous harm to Muslim unity and the Palestinian cause. Since the Islamic revolution of Iran in February 1979 till today, Iran has been consistent in its support to the Palestinian struggle for emancipation.

Instead of taking Iran along with them, majority of the Arab countries tend to fall into the trap of the US and Israel to isolate Iran and destabilise its regime.

Israel and not Iran is a major threat to the Arab-Muslim world because of three main reasons. First, Iranian support for the liberation of Palestine from the clutches of Jewish occupation is without any shadow of doubt.

Iran has practically supported anti-Israeli PLO, Islamic Jehad and Hezbollah whereas no other country has come to salvage millions of Palestinians who are a victim of Israeli aggression and occupation since the June 1967 Arab-Israeli war.

Second, it is American bias, hostility and paranoia against the revolutionary regime of Iran which has led to consistent US policy to isolate Iran except during the second term of the then American president, Barack Obama, which paved the way for signing a nuclear deal with Iran in 2015 and the gradual lifting of US sanctions against Tehran in place since 1979.

The US-Israeli nexus has been instrumental in pushing Arab regimes turn against Iran and deviate from their prime responsibility to liberation of occupied areas of the Arabs and formation of an independent Palestinian state, with East Jerusalem as its capital.

Third, while the US is raising a hue and cry over Iran’s so-called nuclear ambitions and has asked European powers, particularly France and Germany, to withdraw from the Iran nuclear deal, it has totally disregarded the fact that in the Middle East it is only Israel which is a nuclear state.

Washington’s uneven policy on nuclear proliferation is a cause of major conflicts in the Middle East. The 2015 nuclear deal had ensured Tehran’s commitment for capping and rolling back its nuclear programme as a quid pro quo for the lifting of US sanctions against Iran.

Unfortunately, it is not Iran but the Trump administration which has withdrawn from the Iran nuclear deal and re-imposed sanctions against Tehran.

Calls to isolate Iran will be counter-productive because such a policy will give an impetus to hardline elements in the Iranian establishment and deepen anti-Americanism in the Middle East. Despite 40 years of efforts to isolate Iran and destabilise its regime, Iran has been able to withstand such pressures and maintain its influence in Iraq, Syria, Lebanon and parts of Yemen.

The US used the Warsaw Conference for ‘Iran bashing’ and thus giving Israel space despite its occupation of Arab areas, including al Aqsa Mosque. Representatives from the Arab world sat for a dinner in the Royal Castle in Warsaw with Israeli Prime Minister Benjamin Netanyahu who is held responsible for destroying the Oslo peace process and unleashing a reign of terror in Gaza and West Bank.

Netanyahu proudly pointed out in Warsaw the “unusual force, clarity and unity against the common threat of the Iranian regime”. On the other hand, US Vice-President Mike Pence criticised Europe for not supporting American sanctions against Iran, calling such a policy “an ill-advised step that will only strengthen Iran, weaken the EU and create still more distance between Europe and the United States. The time has come for our European partners to withdraw from the Iran nuclear deal and join with us”.

However, Germany which is a core member of the European Union and Europe’s strongest economic power rejected American rhetoric on Iran when German Foreign Ministry official Niels Annen said, “Europe is not divided on the issue of Iran. Europe supports the nuclear accord with Iran.”

German Foreign Minister Heiko Maas, while speaking at the Munich security conference held the other day, made it clear, “Together with the Brits, French and the entire EU, we have found ways to keep Iran in the nuclear agreement until today.”

Realistically speaking, the Arab threat perception in the Middle East is totally misplaced because it is Israel and not Iran which is a major threat in the region with its nuclear weapons and carrying out brutal atrocities against the Palestinians of Gaza and the West Bank. Its military involvement in Syria and Lebanon with the support of the US is another manifestation of its aggressive and militaristic ambitions in the region.

Certainly, much harm has been caused to the Palestinian struggle by compromising with Israel. It is a matter of regret that not one word expressing solidarity with the Palestinian struggle for emancipation was uttered in Warsaw conference and there was a mum over Israeli policy to inundate West Bank with illegal Jewish settlements and shifting their capital from Tel Aviv to Jerusalem.

Iran's regional position, Israel, Warsaw anti-Iran conference, Warsaw summit February 27, 2019
As US pushes to isolate Iran, Rouhani fights to keep his top diplomat
From ‘peace and joy’ to ‘Hell will freeze over’: Best of Iranian FM Zarif’s war of words with US