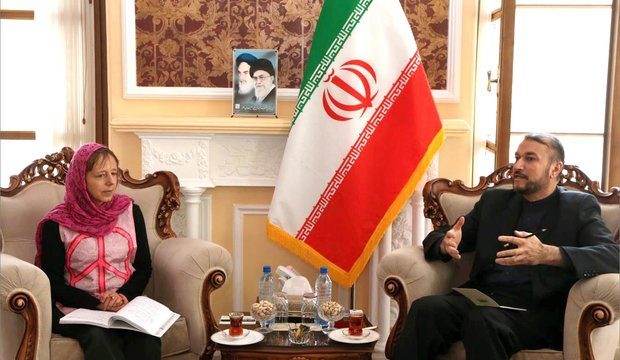 MNA – An official at the Iranian Parliament, Hossein Amir-Abdollahian, said Tuesday that Iran’s strategic policy is helping to achieve peace, stability and security in the world.

Special Assistant to the Speaker of the Iranian Parliament for International Affairs, Hossein Amir-Abdollahian, made the remark on Tuesday in a meeting with a group of American peace-seeking and anti-war activists, known as CODEPINK, in Tehran.

During the meeting, the Iranian official referred to the attempts of terrorist groups to undermine peace and security in the region, and emphasized the constructive role of the Islamic Republic of Iran in resolving regional crises through political approaches and the fight against terrorism.

“The Islamic Republic of Iran did not allow terrorists to dominate the region and endanger international peace and security. Imagine how terrible the world would look right now if the ISIL was ruling in our region,” he said.

“The world is suffering from the wrong policies of the White House,” he lamented.

The Iranian official then answered the questions of those present in the meeting, and hailed their efforts in opposition to war, violence, and extremism, as well as their contribution to the realization of peace, stability and security in the world.

Some of the members of the CODEPINK group, for their parts, censured the wrong regional and global policies that had led to the promotion of war and violence in many countries such as Iraq, Syria, Yemen, and Libya.