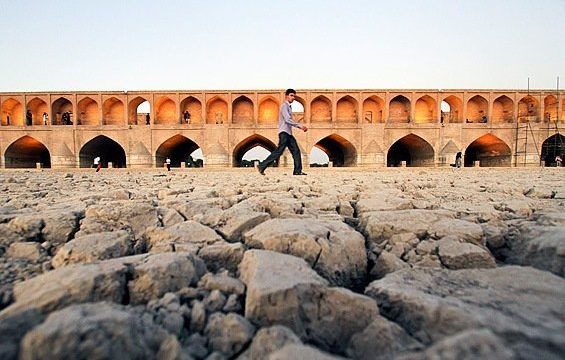 Iran is committing suicide by dehydration

Foreign Policy | Nik Kowsar, Alireza Nader: For more than a year, since December 2017, protests and civil disobedience have been a fixture of life in Iran. Many of the political and economic grievances fueling this unrest will be familiar to foreign observers. But one major reason for these disturbances has gone overlooked: the country’s dire water shortages.

One cause of this water crisis is changing weather patterns. But most of the blame belongs to the Iranian government’s incompetent and corrupt water management. And so-called moderates and reformists, such as former President Mohammad Khatami and current President Hassan Rouhani, are to blame as much as any other Iranian officials for this disaster.

Over the past 40 years, the regime’s entrenched corruption, cronyism, and mismanagement of environmental and natural resources have brought Iran to the edge of disaster. In 2013, the former head of Iran’s environmental protection agency reported that 85 percent of the country’s groundwater was gone, while the population had doubled in the last 40 years. According to Issa Kalantari, a former agriculture minister and current head of the environmental protection agency, millions of Iranians will be forced to migrate to more developed countries, especially in Europe, if the water crisis is not resolved in 20 to 30 years.

Before the 1979 revolution, Iran’s population was less than 34 million, and its renewable water resources were around 135 billion cubic meters. In the last few years, however, as the population reached more than 80 million, the renewable water resources have been reduced to almost 80 billion cubic meters due to lower precipitation and higher evaporation. Meanwhile, the consumption rate per capita has risen. This is an unsustainable trend heading toward a tragic conclusion.

But the story of Iran’s water crisis began before the revolution when Shah Mohammad Reza Pahlavi nationalized Iran’s water resources. For more than 3,000 years, Iranians avoided overexploiting aquifers by relying on indigenous pieces of infrastructure called qanats—slightly inclining underground canals for transferring water within arid and semiarid lands without exposing water to the sun. But the shah introduced to Iran the use of deep well-drilling technology and powerful motor pumps that began depleting the country’s aquifers.

The early years of the revolution made matters worse. Several Iranian water and environmental experts warned the revolutionary government about an expected decline in annual precipitation as a result of climate change, which would have a severe impact on surface water and groundwater resources. To mitigate the effects, they proposed plans for reducing water consumption and diversifying food production. They also suggested shifting water management policies toward recharging aquifers, designing better irrigation techniques, and pursuing more sustainable policies for the agriculture sector, which consumes more than 90 percent of Iran’s water resources.

Instead, the Islamic Republic began to build hundreds of dams, most completely unnecessary, and new networks of water transfer pipelines and channels. The revolutionary government’s hope was that these measures would allow it to collect and supply enough water for agricultural and industrial projects. The dam building also benefited construction companies connected to the regime, especially those affiliated with the Islamic Revolutionary Guard Corps. But the new dams blocked major rivers from reaching many parts of the country and prevented the replenishment of aquifers. As a result, farmers started drilling deeper wells to reach the natural water tables that were gradually sinking.

In the meantime, the regime, striving to gain self-sufficiency in its conflict with the West, encouraged farmers to plant more wheat and other grains without paying attention to the water intensity of cereals and the increasingly dire state of the aquifers. This led to farmers digging tens of thousands of wells, many illegally without any supervision or accountability. In the 40 years since the revolution, the number of wells in Iran has climbed from 60,000 to almost 800,000. The deputy agriculture minister announced in 2018 that 430,000 of these wells were illegal and that farmers were pumping an excessive amount of water from many legal wells. The water tables are now on the verge of complete depletion.

The Islamic regime has built more than 600 dams, promising sufficient water to farmers all around the country. Instead, such infrastructure has prevented water from reaching lakes, wetlands, and aquifers. Aquifers that haven’t been recharged are starting to collapse and subside permanently (an effect that has been evident in areas of the United States such as Fresno, California).

The regime’s destruction of Iran’s environment and water resources are well demonstrated by the dying Zayandeh River. In Persian, Zayandeh means life-giver. The river, which springs from the Zagros Mountains in the west and ends in the Gavkhooni wetland in central Iran, was responsible for the earliest civilizations in central Iran and was the reason for the centuries of the prosperity of the magnificent city of Isfahan, known in Persian as “half of the world.”

Today, the ongoing death of the river is devastating the lives of thousands of farmers. It has led to mass demonstrations against the regime not just in Isfahan but in smaller cities such as Varzaneh—justifiably so. During the last three decades, the Zagros Mountains have experienced less snowfall due to a change of precipitation patterns, leading to the shrinking of the Zayandeh. But the Iranian government, instead of finding sustainable solutions to the crisis, has instead intensified and sped up the river’s destruction through neglect and corruption.