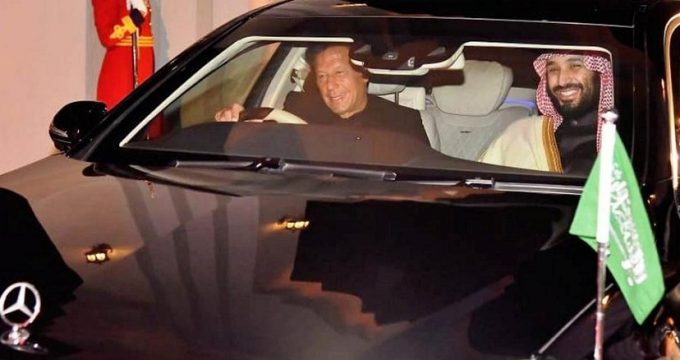 Alwaght – Saudi Crown Prince Mohammed bin Salman arrived in Islamabad on Sunday amid tight security that reportedly the Prime Minister Imran Khan personally supervised. The visit to Pakistan, ushering in a tour that will take the de facto Saudi ruler to the Southeast Asian states and China, is of resounding significance to Pakistan.

The Pakistani government presently struggles with a $7 billion budget deficit and counts on the Saudi finances as the oil-rich monarchy is already a source of major credits to Islamabad. Last year, Pakistan’s finance minister said the state was to receive a $6 billion loan from Riyadh which will largely help the country cover its funding deficit.

That took the new PM to go big in a lavish reception ceremony despite his austerity measures since he assumed the office in August 2018, hoping to get the cash he desperately needs to run the country.

No certain bill for the reception ceremony was disclosed, but some programs including escorting the crown prince’s plane with JF-17 fighter jets upon its entry into the Pakistan’s airspace, reserving many five-star hotels to host the 1000-man accompanying delegation, renting 300 Toyota Land Cruisers for the guests’ use, and flying thousands of pigeons during the welcoming all signaled an apparent message: Islamabad leaders were highly optimistic about great returns of the royal trip to their country.

Why is Pakistan important in Saudi strategy?

The last time a Saudi leader visited Pakistan was in 2006 when the late Saudi King Abdullah bin Abdulaziz visited the Indian Peninsula state. Since then, the bilateral ties underwent many highs and lows. Still, in the eyes of the Saudis Pakistan reserves a vital place.

Despite its enormous wealth, Saudi Arabia is devoid of a powerful military force. The country has so far bought cutting-edge military equipment in a bid to relatively cover the weakness, but it was not successful as the lack of human resources remains a big challenge. This pushes the Saudis to turn head to the Pakistani military personnel in pursuit of their regional military ambitions. Although Pakistani leaders declined to officially send troops to Yemen to assist the Saudis there, the kingdom’s defense policy remains optimistic about receiving foreign mercenary help, including from the Pakistani army. The expectation of Pakistani help persuades the Saudis to supply further cash to Islamabad this time too.

Furthermore, while Saudi Arabia is laying the foundation for its nuclear capabilities, Pakistan as a country with nuclear technology and bombs can be a good assistant to the Riyadh ambitions. Saudis are even more determined to push forward with their nuclear program as the Iran nuclear deal’s future is shrouded in mystery after the US President Donald Trump pulled out of the 2015 agreement.

In 2014, Saudi Arabia bought from China a number of DF-21 nuclear-capable missiles with a green light from the US. Riyadh’s view is that strategic alliance with Islamabad could lead to delivery of nuclear bombs in case of an emergency situation to the monarchy.

Another case eyed for discussion by the Saudi leaders was peace talks with the Taliban. Beside the US, Pakistan, and India talks with the militant group, Iran, a powerful regional rival to Saudi Arabia, also told of its peace efforts as Taliban delegation visited Tehran. Bin Salman grows increasing concerns that future Afghanistan power structure could form in Iran’s favor. So, getting a view of the negotiations’ results and passing the Saudi concerns to Imran Khan is also part of Prince Mohammed’s four-day visit agenda.

Stabilizing Afghanistan will be in the best interests of the Islamic Republic of Iran, something unacceptable to the Saudi rulers. The expansion of religious schools, or madrasas, teaching Wahhabism, a fundamentalist reading of Islam, by Saudi Arabia across Pakistan to nurture radical and terrorist minds in Pakistan serves to set up hurdles ahead of stability in Afghanistan. The terror attacks in eastern Iran on the civilians and military personnel by anti-Iranian terrorist groups such as Jaish ul-Adl and Jundallah, allowed by poor Pakistani security watch or even ignorance, all serve the anti-Iranian Saudi goals.

And finally, it seems that the Saudi prince is also seeking to do a favor for his American and Israeli friends: Helping Islamabad-Tel Aviv diplomatic relations normalize. This case was raised on Sunday by the Pakistani Foreign Minister Shah Mahmood Qureshi. He said Pakistan was ready to normalize with the Israeli regime if the Palestinian issue was resolved, exhibiting Imran Khan’s intention to capitalize on the case for Pakistan. Aware of the significance of Tel Aviv-Islamabad thaw to the Israelis and their American allies, the PM seeks to sell this strategic privilege expensive to the other sides.

Here, bin Salman plays as a mediator and very likely part of the price for the normalization efforts will be paid by the Saudis. Accomplishment of the mission can help the puzzle of Israeli regime regional acceptance, a program Trump administration has been pursuing nonstop over the past two years.

However, it seems that Imran Khan should pay a high price for getting Saudi financial support. Now Pakistan is under heavy pressures not only from its neighbors but also from its Western allies, mainly the US, for its intelligence support for regional terrorism and this sends Islamabad ties with these sides to further strain. Terrorism also jeopardizes Pakistan’s home security and stability, which can negatively influence cooperation with China, a big investor in the Pakistani economy.

Normalization will also come costly to Imran Khan when it comes to public opinion. Pakistanis have always held their anti-Israeli sentiments. Normalization with Tel Aviv will go against the public’s zero-tolerance policy towards relations with the Israeli regime and deal a fatal blow to Imran Khan’s domestic legitimacy and approval.