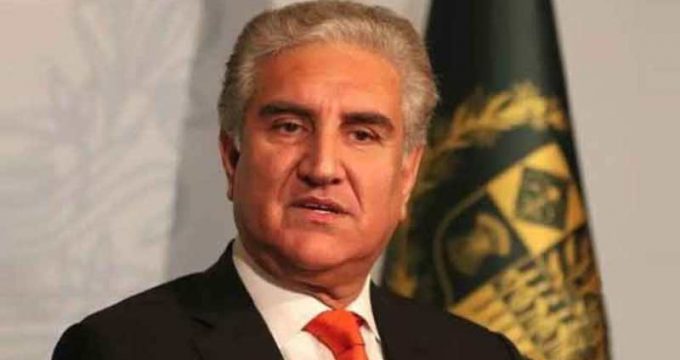 IRNA – Pakistan Foreign Minister Shah Mahmood Qureshi says Islamabad will extend all out cooperation to Iran over the recent terror attack in its Sistan-Baluchestan Province.

A suicide attack on a bus carrying the Islamic Republic Guards Corps (IRGC) personnel martyred 27 and wounded 13 in southeastern Iran on February 12. A terrorist group so-called Jaish al-Adl, affiliated to Al-Qaida, claimed responsibility for the incident.

Talking exclusively on ‘Dunya Tv’ channel’s program “Dunya Kamran Khan Kay Sath”, Shah Mahmood Qureshi said, ‘We have strongly condemned the terrorist attack in Iran and we are in touch with Iran over the issue.’

“I had a detailed telephonic discussion with Iranian Foreign Minister Mohammad Javad Zarif and we have also sent an expert level delegation to Iran which also met with the leaders of Islamic Revolutionary Guard Corps (IRGC),” said the minister.

He said Iran and Pakistan have agreed to cooperate with each other and ‘we will address the Iranian concerns and remove all differences.’

The top Pakistani diplomat went on to say that Iran and Pakistan have been cooperating with each other on such issues.

He recalled when some of the Iranian border guards were abducted, Pakistan took a prompt action and recovered five of them and handed over these people to Iranian authorities.

“We have developed an understanding to stop such attacks on border areas through a joint center for quick response,” said Qureshi.

“Inshallah we will coordinate with them and fully cooperate with them,” said the minister.