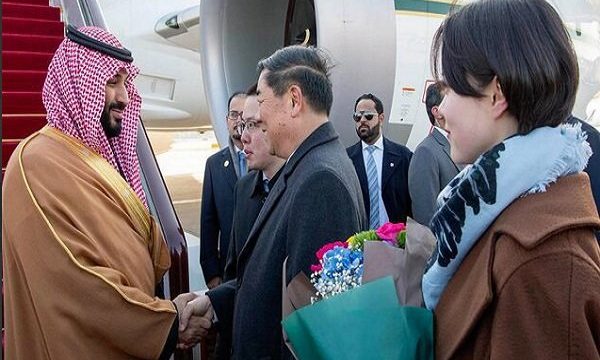 MNA – Saudi Crown Prince Mohammed bin Salman arrived in China on Thursday, on the third leg of his Asia tour that started in Pakistan.

At the airport, he was greeted by a number of Chinese officials, including Khi Li Fung, Deputy Chairman of the Advisory and Political Council of the People’s Republic of China, and Chinese Ambassador to the Kingdom Li Hua Xin.

He will meet Chinese President Xi Jin Ping during the official visit.

While in India, hundreds of people took to the streets of Kargil in the Ladakh region of India-controlled Kashmir on Tuesday, to protest against Saudi Arabia’s Crown Prince Mohammed bin Salman’s visit to the country.

Referring to Saudi Crown Prince Mohammed bin Salman’s recent visit to Pakistan, top military aide to the Iranian Leader Major General Yahya Rahim Safavi said Pakistan is a neighbor of Iran, and it should know that Saudi government is not reliable because it will not last for long.

In his press conference with Pakistani counterpart, Saudi Minister of State for Foreign Affairs Adel bin Ahmed Al-Jubeir, who is accompanying MBS in his Asian tour, called Iran a “chief sponsor of terrorism.”

In response, Iranian Foreign Ministry Spokesman Bahram Ghasemi said Saudi Arabia, as the seedbed of a fundamental ideology, which exports organized terrorism throughout the world, lacks any credibility to accuse other countries on terrorism.