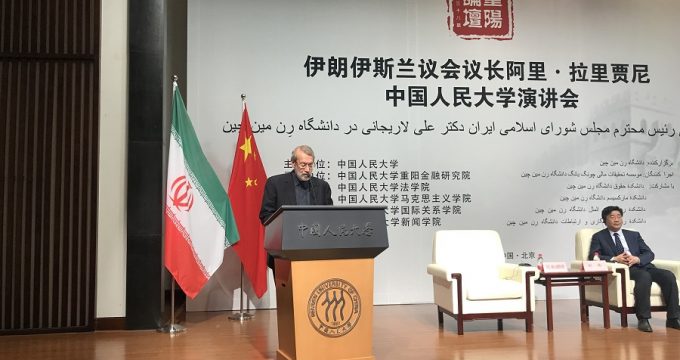 IRNA – Iran expects the parties of the 2015 nuclear deal to remain committed and resist the bullying of the US, the country’s Parliament Speaker Ali Larijani said Wednesday.

The Iranian lawmaker who was addressing a gathering of professors and students at Renmin University of China in Beijing said that the International Atomic Energy Agency (IAEA) has confirmed Iran’s full commitment to its obligations under the nuclear deal 13 times, but the US has resorted to excuses for escaping its commitments while persuading other parties to do follow suit.

Larijani who was visiting China upon an official invitation of his Chinese counterpart Li Zhanshu, said the Islamic Republic of Iran was firmly supporting the principle of not meddling in the internal affairs of other countries, and respecting their sovereignty and self-determination.

To the contrary, he added, the US is undermining the same principles under various covers by supporting international terrorist groups and extremism, as well as instating illegitimate regimes in different parts of the world.

‘The US intervention in other countries’ internal affairs is a serious threat,’ Larijani warned.

‘Taking a hostile approach toward other nations in various ways such as imposing unilateral and extraterritorial sanctions, as well as levying trade tariffs on other countries’ exports, Washington aims to hurt other nations, among them the civilized people of China and Iran,’ the Iranian senior legislator said of the US foreign policies.

Iran’s regional policy is based on promotion of peace, sustainable development, prosperity of nations, solving the differences in a peaceful way through dialogue and multilateral consultations, he said, adding that Tehran has been the most active player on the regional and international stages.

Larijani is accompanied by some other senior Iranian officials, including the country’s Foreign Minister Javad Zarif and the Oil Minister Bijan Zangeneh.