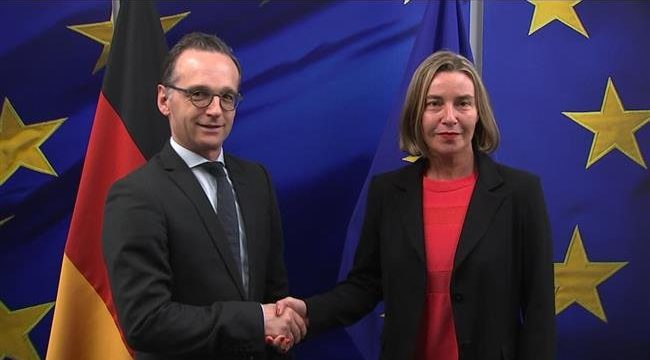 Press TV – Germany and the European Union on Friday rejected a call by US Vice President Mike Pence for Europe to follow in the US’ footsteps and leave the Iran nuclear deal in a bid to “isolate” the Islamic Republic.

German Foreign Minister Heiko Maas said Friday that Europe would seek to keep the deal alive. But pressed on what more Europe could do as its companies exit Iran under US pressure, he declined to spell out any new tactics.

“Together with the Brits, French and the entire EU we have found ways to keep Iran in the nuclear agreement until today,” Maas told the Munich Security Conference.

Without this agreement, “the region will not be safer and would actually be one step closer to an open confrontation,” he added.

EU foreign policy chief Federica Mogherini also told the same Conference that the bloc was determined to preserve the “full implementation” of the deal, saying it was vital to European security and an effective guarantor of peace.

“I believe if it was not for the European Union and its member states, starting with France, Germany and the UK, I am sure that the nuclear deal with Iran would have been dead long ago,” she said. “We believe it is fundamental and crucial for our security.”

The comments came after Pence used a speech in Warsaw on Thursday to deliver the most direct attack to date from a US official on Europe’s attempts to salvage the agreement.

He also criticized the initiative of France, Germany and Britain to allow European companies to continue operating in Iran despite US sanctions.

On the sidelines of the Munich Security Conference on Friday, Mogherini discussed the state of implementation of the Iran nuclear deal, known as the JCPOA, with Iranian Foreign Minister Mohammad Javad Zarif.

During the meeting, Mogherini reiterated the EU’s firm determination to preserve the JCPOA, which continues to deliver on its objectives and is crucial for both regional and global security, according to the EU External Action Service’s website.

She also underlined the need for continued, full and effective implementation of the deal by all parties, and in this regard both Mogherini and Zarif discussed the recent registration of INSTEX in France and committed to work together for its further operationalization.

Europe on Jan. 31 officially announced the creation of its Special Purpose Vehicle (SPV) – officially called the Instrument in Support of Trade Exchange (INSTEX) – which was launched in a bid to protect trade ties with Tehran against American sanctions. The mechanism was registered by France, Germany and the UK in Paris, and will, in its initial stage, facilitate the trading of humanitarian goods such as food, medicine and medical devices.

Mogherini and Zarif also had an exchange of views on a number of other issues, from human rights to the implementation of the FATF Action Plan, to regional crises, including in Syria, in Yemen and Afghanistan.

Out of four parliamentary bills required for Iran’s accession to the global anti-money laundering body, the Financial Action Task Force (FATF), only two of them have so far gone into effect and the fate of the other two are still in limbo.

A bill amending Iran’s Combating the Financing of Terrorism (CFT) law and a bill on Iran’s accession to the United Nations Convention against Transnational Organized Crime are still problematic in the eyes of the Guardian Council, the legislative watchdog.

The FATF announced late last year it extends the deadline for Iran to complete reforms to meet conditions for getting out of the body’s black list until the February meeting.

The upcoming Financial Action Task Force meeting is to be held in Paris on February 17-22.