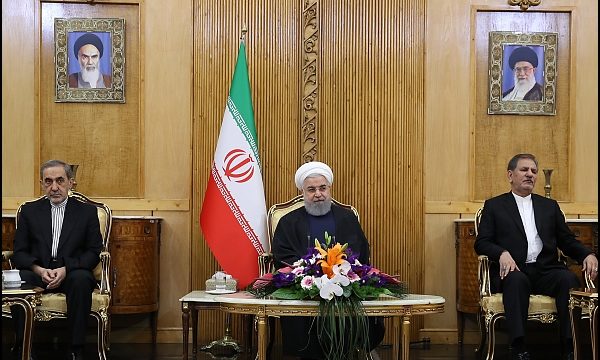 President: US, Israel are root causes of terrorism in ME

IRNA – President Hassan Rouhani says the US and Zionism are the root cause of terrorism in the Middle East region.

‘The root cause of terrorism in the region are the US and Zionism and certain oil rich states in the region are also financial supporters of terrorists,’ President Rouhani said in an interview with reporters at Tehran’s Mehrabad Airport prior to departure to Sochi, Russia, on Thursday to attend a meeting of Iran-Russia-Turkey summit.

The president condoled the Supreme Leader and Commander-in-Chief of the Armed Forces Ayatollah Seyed Ali Khamenei, the bereaved families of martyrs, the armed forces and the Islamic Revolution Guard Corps (IRGC) on martyrdom of a number of the IRGC personnel in an attack on their bus on Khash-Zahedan road on Wednesday.

The president said, ‘Such crimes and cowardly acts will not have the least effect on the will of the great Iranian nation and they will continue the path they have chosen powerfully.’

President Rouhani said Iranian people will not yield to the big powers as the people have since the beginning of the Islamic Revolution been facing the mercenary terrorists and they will continue efforts and fighting to uproot them. ‘Certainly, we will take revenge of blood of our martyrs on the mercenary grouplet.’

The president also invited certain neighbors to fulfill their mission and legal duties within framework of the policy of good neighborliness and asked them to act on their duty and mission and not to allow terrorists abuse soil of their country to launch terrorist measure against the neighbors.

‘Should such a trend continue and they (the neighboring countries) fail to prevent terrorists, we will have the right based on law and international regulations to pursue our rights at due time.’

As for Sochi meeting, the president said he is to attend the fourth Iran-Russia-Turkey summit on the invitation of Russian President Vladimir Putin.

He added that the first such summit was held in Sochi, the second one in Ankara and the third one in Tehran and the fourth one is to be in Sochi, focusing on regional issues and security, especially Syrian issue, within framework of the Astana process.

Elsewhere in the interview, the president said terrorist groups in Syria have suffered very strong blows and they have been cleansed in many parts of Syria.

A number of them are still in parts of north Syria and eastern Euphrates, said the president, adding that the process, i.e. anti-terrorism campaign to the end, should continue.

He said Iran, Russia and Turkey have been following their prime goal of campaign against terrorism.

The second issue, pertinent to Syria, is under current conditions presence of foreign forces in Syria and if a country is not present in Syria on invitation of the legal government of Syria and has entered without the permission, it should leave the country, said Rouhani.

‘This is especially true with Americans, who have since the beginning been present in Syrian territory contrary to international regulations nand are occupiers; Of course, they recently announced that want to leave and if they are right, that’s good news. Of course, we can never trust the claims, promises and commitments of Americans. The world also does not trust the claims of them, especially claims of the current government which makes claims every week and every day. Though, withdrawal of foreign forces is one of the goals which is on the table.’

He said at the time being, return of refugees and reconstruction of Syria are of highly important and set as the goal of the three countries of Iran, Russia and Turkey.

On importance of compilation of the constitutional law and the committee in charge of compilation of it in Syria, the president said it is also an issue which will is usually emphasized in the tripartite session and it will definitely stress the subjects.

He hoped that Iran, Russia and Turkey will have a fruitful summit and they will discuss certain issues and that the path, which entails restoration of security in Syria, will be continued to the end.

He underlined that Syrian fate should be decided by Syrian people and they are the one who should decide. ‘The intra-Syrian talks is a right path which should continue and we hope to witness peace, stability, security and democracy in the dear and brother country Syria soon.’

President Rouhani said Iran-Russia-Turkey talks will continue. ‘We hope to discuss bilateral and trilateral issues on the sidelines of the regional issues; the opportunity for such discussion also exists there. So, we will have separate meetings with (Turkish President Recep Teyyip) Mr. Erdogan and (Russian President Vladimir) Mr. Putin and we hope that the visits will be helpful and blessed as regards our bilateral ties with Russia and with Turkey as well as regional issues.’