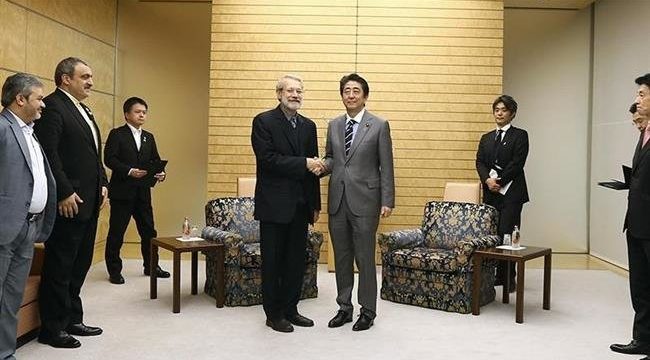 February 14, The Iran Project – Heading a high-ranking delegation, Iranian Parliament Speaker Ali Larijani paid a two-day visit to Japan on Monday  (Feb. 11) to hold talks with senior officials of the East Asian country on a range of issues, including ways to boost parliamentary ties between Tehran and Tokyo.

While in Tokyo, Larijani held meetings with senior Japanese officials including President of Japanese House of Councilors Chuichi Date, Prime Minister Shinzo Abe and Ki Shida, head of the Iran-Japan Parliamentary Friendship Group. He also visited a number of industrial projects in Japan.

Upon his arrival at Tokyo airport, Larijani said his current visit is aimed to expand parliamentary cooperation and also to consult over issues of mutual interests like those related to fighting terrorism and safeguarding bilateral and economic cooperation.

During the meeting with members of Japan’s House of Councilors in the Diet, Speaker Chuichi Date stated that the visit of the Iranian delegation to Tokyo marks the start of a new chapter of bilateral ties between the two countries.

The two sides discussed the latest status of bilateral ties in various fields and highlighted the need for increased trade between the two countries.

On the second day of his visit to Japan, Larijani conferred with Abe on the expansion of commercial and economic cooperation between the two countries. Both officials agreed on a policy to strengthen traditionally friendly relations.

During a meeting with Larijani, Japanese premier hailed his country’s ties with Iran as “traditionally friendly,” and said Japan and Iran are marking the 90th anniversary of diplomatic relations this year, adding that Tokyo is keen to further boost its cooperation with Tehran.

Ali Larijani in a meeting with the head of the Iran-Japan Parliamentary Friendship Group emphasized that Iran-Japan relations are based on a cultural context, and these relations must be strengthened.

Larijani said, “Some countries create problems in the path of relations that need to be addressed…, and your role and friendship are definitely effective in solving this problem.” noting that, “In the minds of the Iranian people, there is no negative point towards the Japanese people and they are interested in expanding relations with your country.”

Moreover, Speaker Ali Larijani along with his accompanying delegation visited the Aqualine Underwater Tunnel and were briefed on the construction method and technologies used in it.

Also, the visiting Iranian delegation attended Central Office of Panasonic Company in Japan and was familiarized with the modern technical know-how and technologies of this company.

Then they visited advanced subway station in Japan and familiarized with the construction method of multipurpose subway stations in this country.

Japan is among those countries which have been exempted from US sanctions against Iran and can buy Iran’s oil. Iran is a major supplier of crude oil to Japan.

The two countries have been struggling to keep mutual trade unharmed since the re-imposition of US sanctions on Iran last year in the wake of Washington’s withdrawal from the 2015 nuclear deal.