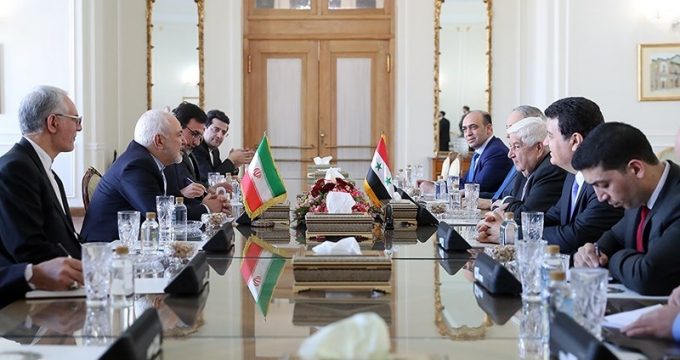 MNA – Iranian Foreign Minister on Tuesday censured the Israeli regime’s warmongering in the region and its support of terrorism, saying the Zionists are putting all-out efforts to disturb the peace in Syria.

Noting that the Israeli regime is backing the terrorist elements in the war-torn Arab country, Zarif said “they are against the peace and tranquility in Syria and the region.”

He made the remarks during a meeting with his Syrian counterpart Walid al-Moallem, who is visiting Tehran in the framework of the continuous coordination and consultation between Syria and Iran.

The top diplomat stressed the need for maintaining unity, coordination, and better cooperation among the regional countries to counter such acts of terrorism.

During the meeting, the two sides also conferred over ways to expand bilateral relations.

Referring to First Vice President Es’hagh Jahangiri’s recent visit to Syria and signing of several economic agreements between the two countries, Zarif once again expressed the Iranian private sector’s readiness to have a stronger presence in the Syrian market.