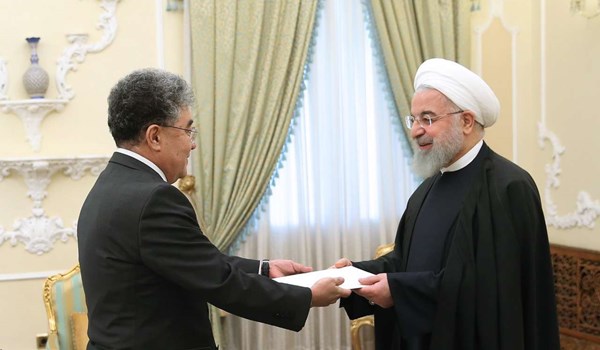 Rouhani stressed development of close ties between Tehran and Astana, calling for activating the existing potentials to further develop the ties.

The Iranian president made the remarks in a meeting with the new Ambassador of Kazakhstan to Tehran Askhat Orazbay on Saturday, while receiving his letter of credence. Rouhani said “the Islamic Republic of Iran and the Republic of Kazakhstan have common roots and culture.”

The Iranian president added, “We can take effective steps in securing the interests between the two nations by taking advantage of the common grounds.”

On Kazakhstan’s active role in Iran’s nuclear negotiations and the Astana Process on Syria, the president said, “Tehran and Astana have had good cooperation in different regional fields, including the Caspian Sea.”

“In many important regional and international issues, Iran and Kazakhstan have very close views and we can further improve our cooperation and coordination,” he added

Rouhani also said, “Tehran and Astana enjoy great economic potentials and we hope to witness further development of relations between the two countries.”

In the meeting, Orazbay, for his part, said, “I assure you that we will make our best efforts to deepen friendly relations between the two countries.”

In a related front, earlier on January 22, It was announced that Iran and Kazakhstan will further develop cooperation on healthcare systems and medical services, as the two countries are determined to implement the memoranda of understanding (MoUs) signed by their health ministers.

In a meeting at the Ministry of Health of the Republic of Kazakhstan, Saber and Birtanov emphasized the expansion of cooperation through the implementation of signed MoUs between the ministries of the two countries, listing the existing capacities and capabilities in the health sector.

Birtanov announced in the meeting that he would travel to Tehran in the first half of the next Iranian calendar year (to start on March 21, 2019).

Iran and Kazakhstan have tried in recent years to develop their mutual and regional cooperation.

“I hope the mutual cooperation between the two countries would further deepen in light of the amicable ties and cooperation,” President Rouhani said in his message, congratulating his Kazakh counterpart on the occasion of Kazakhstan’s Independence Day.

The Iranian president underlined that Iran and Kazakhstan have age-old relations and a history of amicable relations.

In relevant remarks earlier in December, President Nazarbayev described Iran as the main partner of his country in the region, and voiced strong support for the 2015 nuclear deal between Tehran and the world powers.

“We consider the Islamic Republic of Iran as our main partner in the region and are interested in the expansion of beneficial cooperation with Tehran, specially in transportation, agriculture and mines fields,” Nazarbayev said in a meeting with Saber.

He also referred to Iran’s nuclear issue, and said, “We support respect for international agreements on Iran’s nuclear program and its effective implementation in the future.”