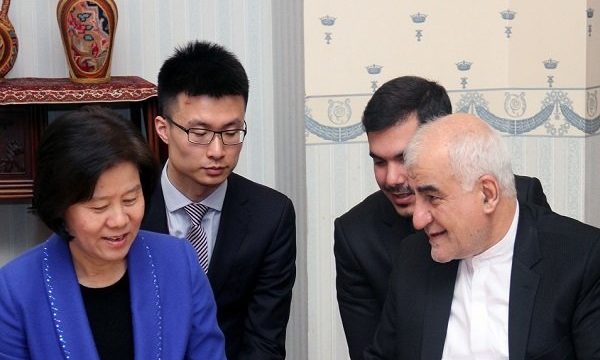 Iran, a strategic country on path of One-Belt-One-Road initiative

MNA – Vice-Chairwoman of the National People’s Congress Standing Committee Shen Yueyue said that Islamic Republic of Iran is a strategic country on the One-Belt-One-Road (OBOR) initiative.

She pointed to the long-lasting and age-old friendship between Tehran and Beijing and introduced the Islamic Republic of Iran as an important and strategic country on the initiative plan of One-Belt-One-Road.

She made the above remarks on the sidelines of organizing 40th glorious victory anniversary of the Islamic Revolution in the Embassy of Iran to Beijing and congratulated this auspicious occasion to the government and noble nation of the country and stated, “the relationship between the Islamic Republic of Iran and China is of specific importance in a way that Iran is a strategic partner to the People’s Republic of China.

For his part, Iranian Ambassador to China Mohammad Keshavarzzadeh termed bilateral relationship between Iran and China as ‘historic’ and added, “the two countries of Iran and China have experienced progressing and growing ties over the past forty years.”

Currently, the relationship between Iran and China is stable based on mutual respect and common interests, he maintained.

A glorious ceremony of 40th victory anniversary of the Islamic Revolution was held late on Fri. Feb. 1 in Iran Embassy to Beijing with the participation of a number of high-ranking officials of Chinese government, ambassadors, diplomats and military attaches of the embassies based in China.