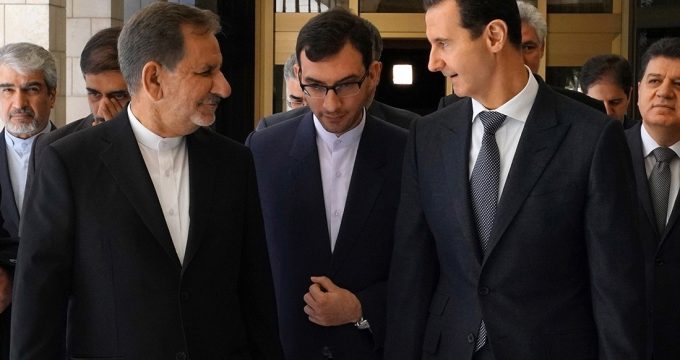 January 30, The Iran project – Heading a 40-member delegation of traders, Iran’s First Vice President Es’haq Jahangiri arrived in the Syrian capital (Jan. 28) on Monday on a two-day visit to to talk on ways to expand bilateral transactions and accelerate the process of Tehran-Damascus cooperation in various political, economic and cultural fields.

Upon his arrival at Damascus international airport, Jahangiri was greeted and welcomed by Syrian transport and economy ministers, the Minister of Roads and Urban Development of Iran and the head of the Islamic Republic of Iran mission in Syria.

Top officials from Iran and Syria inked 11 agreements, including memorandums of understanding (MoUs), in a bid to boost cooperation between the two countries in diverse areas. The documents were signed during a meeting between Iranian VP and Syrian premier.

In the joint meeting held at the palace of Syrian prime minister, Es’hagh Jahangiri said, “Iran is proud to be a pioneer in the fight against terrorists, and considers the victory of the people and the Syrian government as its own victory.”

Saying that the Islamic Republic of Iran will stand by Syria’s government and nation during the reconstruction period, Jahangiri said, “the 14th joint economic summit between the two countries indicates that Syria is entering a new stage and there should be efforts made to rebuild the country.”

He added that Iran takes pride that it has been the forerunner of fighting terrorism, adding that if it were not for the Syrian government and people and well as its allies’ sacrifices, today Daesh had succeeded in the region.

According to the Syrian SANA news agency, the agreement was signed by governors of Syria’s and Iran’s Central Banks.

Iran and Syria have enabled their banks to conduct transactions in their local currencies and non-dollar foreign currencies, lifting a key hurdle to their trade and investment.

In a meeting with  Jahangiri in Damascus, Assad said the recent signing of several agreements between Iran and Syria will pave the way for the two countries to boost their steadfastness in the face of an economic war being waged against them by certain Western countries.

The Syrian president went on to say that Iran and Syria should make more joint efforts to thwart the plots of those countries, which are aimed at weakening the two countries, hindering their independent decision-making and breaking the will of their peoples.

He added that Iran and Syria have always stood by each other during hard times and called for Iranian state and private sectors to play a more active role in the reconstruction plans of the war-stricken country.

The Iranian vice president, for his part, commended the Syrian government and nation for the great achievements they have made in their counter-terrorism battles.

In the meeting with Syrian speaker of the People’s Assembly, the Iranian first VP said that the two countries need to be vigilant against the conspiracies of the enemies, adding “when the Americans see they did not succeed militarily, they are trying to achieve their goals through imposing political and economic pressures.”

Jahangiri declared that Iran will stand by the Syrian people and government in the Syrian reconstruction process as it did during the fight against terrorism.

Hammoudeh Sabbagh, for his part, referred to the expanding relations between the Islamic Republic of Iran and Syria after the Islamic Revolution, saying “Syria is looking for Iran’s partnership during reconstruction period as it stood by us in the fight against terrorism.”

Speaking to  Jahangiri, Muallem said Damascus wants Iran to stand by the Syrian government and nation until the ultimate victory against the enemies and during the reconstruction of the Arab country.

“Iran and Syria have gained a great achievement by defeating terrorists, and also today, they should promote economic cooperation under tough sanctions to go through this stage,” the Syrian minister added.

He further noted that Iran and Syria are in a united front of the battle against terrorism and global arrogance, which he said is spearheaded by the US and the Zionist regime of Israel.

For his part, Jahangiri praised Syria’s victories against the enemies, noting that the US seeks to mount economic pressure and impose tougher sanctions in the wake of the failure of its policies.

Iran is a key ally of Syria as the Islamic Republic has been providing military advisory assistance to Damascus in its anti-terror campaign.