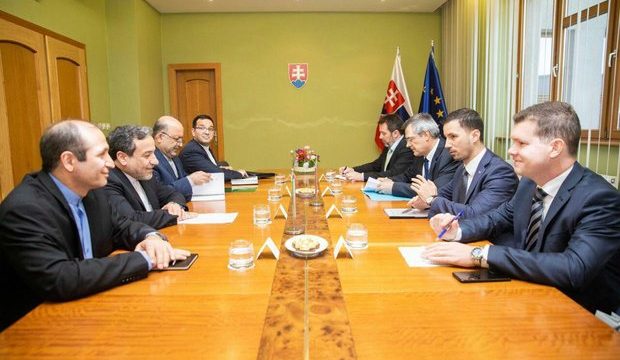 MNA – Iranian Deputy Foreign Minister Abbas Araghchi arrived in Bratislava on Tuesday and conferred with Slovakian officials on the EU’s planned trade mechanism aimed at facilitating trade with Iran in the face of US sanctions.

Abbas Araghchi, Iranian Deputy Foreign Minister for Political Affairs, arrived in Slovakia Tuesday on top of a high-ranking delegation as the second leg of his three-nation tour, which also include Austria and Bulgaria.

While in Bratislava, he held talks with deputy ministers of the Slovakian foreign ministry and the minister of economy.

In these separate meetings, the Iranian diplomat discussed the development of bilateral relations between Tehran and Bratislava, particularly in the fields of economic and political cooperation.

They also discussed the latest developments in the region and the world.

The Slovakian side called for the finalization of EU’s trade mechanism with Iran, officially known as the Special-Purpose Vehicle (SPV), voicing hope that the dollar-independent alternative payment channel would cover the two countries’ economic transactions in the face of US sanctions.

The European country also highlighted its support for development of bilateral cooperation with Iran, and voiced readiness to continue its consultations with the Islamic Republic.

Araghchi and his accompanying delegation will then leave Slovakia for Bulgaria as the last leg of his European tour.