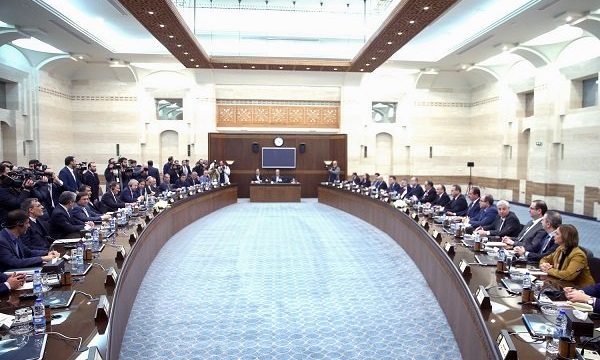 Heading a senior economic delegation, first Vice President of the Islamic Republic of Iran, Es’hagh Jahangiri, arrived in Syrian capital of Damascus on Monday afternoon to meet with President Bashar al-Assad, Prime Minister Imad Khamis and other Syrian officials to talk on ways to expand bilateral transactions and accelerate the process of Tehran-Damascus cooperation in various political, economic and cultural fields.

In the joint meeting held at the palace of Syrian prime minister, Es’hagh Jahangiri said “Iran is proud to be a pioneer in the fight against terrorists, and considers the victory of the people and the Syrian government as its own victory.”

Saying that the Islamic Republic of Iran will stand by Syria’s government and nation during reconstruction period, Jahangiri said “the 14th joint economic summit between the two countries indicates that Syria is entering a new stage and there should be efforts made to rebuild the country.”

The Iranian first vice president said that Iran is ready to help Syria in various fields, adding “one of the most important issues is the banking system and the direct link between the banks of the two countries through a non-SWIFT system.”

He added that the governor of Central Bank of Iran (CBI) is accompanying him on the visit “to resolve the banking problems before we go ahead and lay the ground for the development of the activities of the two countries’ private sectors.”

Jahangiri, emphasized the formation of a long-term and strategic partnership between the two sides and said “economic agents should be sure that the two governments have a strong will to resolve issues and to implement the existing agreements.”

He expressed the Iranian side’s readiness to cooperate with Syria in technical and engineering fields, saying that Iran enjoys technical know-how to build power plants.

He emphasized the reconstruction of the road and rail infrastructure in Syria and said “Iran is ready to establish a shared railway within the framework of the three-way agreement” to connect the Persian Gulf to the Mediterranean Sea.

The first vice president also expressed Iran’s readiness to cooperate with Syria in its oil and gas sectors.

Jahangiri pointed to Iran’s interest in supplying Syria’s pharmaceutical needs, emphasizing the interest of the Iranian people in visiting the religious and historical places in Syria, calling for bilateral cooperation in that regard.