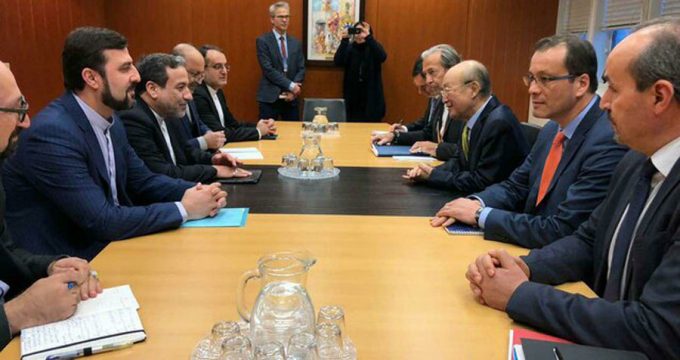 MNA – The Iranian Deputy Foreign Minister Seyed Abbas Araghchi said Monday that 8 months is too long for establishing the Special-Purpose Vehicle (SPV) by the European countries.

He made the remarks while addressing the reporters after his meeting with Director General of the International Atomic Energy Agency Yukiya Amano in Vienna.

“It is more than 8 months that Europeans want to carry out this measure and we understand that it bears many technical and legal difficulties; we understand that US has threatened to sanction anyone work with this financial mechanism; we understand that the mechanism should be designed in a way that it would get around US sanctions and pressures so that involved companies would not be sanctioned; but eight months is a long time for forming such a mechanism.”

All the EU countries are hoping that SPV would be in place soon, he highlighted.

He went on to say that the UK, France and Germany as signatories of JCPOA (Joint Comprehensive Plan of Action) will organize the mechanism, adding, “as we have been told, SPV’s registration process starts today and it is scheduled to be announced within a day or two, unless those who do not favor the formation of these relationships can succeed.”