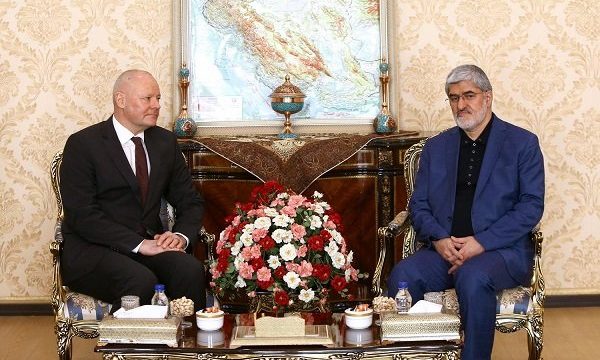 MNA – The German Ambassador to Iran Michael Klor-Berchtold says that the European Union will implement the promised financial channel to Iran in the coming days.

“To complete the SPV, only final steps have remained, we will see the finalization of this process in the coming days,” the German Ambassador to Iran Michael Klor-Berchtold said in a meeting in Tehran with Deputy speaker of Iran’s Parliament Ali Motahari.

The German ambassador said that Europe is doing all it can to implement the financial channel for Iran and that good progress has been made in that regard. He added that the final steps remain to be taken, stressing that in the coming days the payment mechanism will be finalized.

He further described Iran as an important country in the region whose role cannot be ignored in resolving crises and problems of the region.

The diplomat further called for strengthening cultural relations between the two countries.

Deputy speaker of Iran’s Parliament Ali Motahari, for his part, said that it was expected from Europe to implement the SPV and take practical steps in supporting European firms’ investment in Iran.

Motahari, further referred to the recent German government’s action in sanctioning Iranian Mahan aireline, calling on the European country to reconsider its decision.

The Iranian lawmaker further pointed to the potentials between the two countries and called for strengthening cultural ties beyond the political and formal relations.