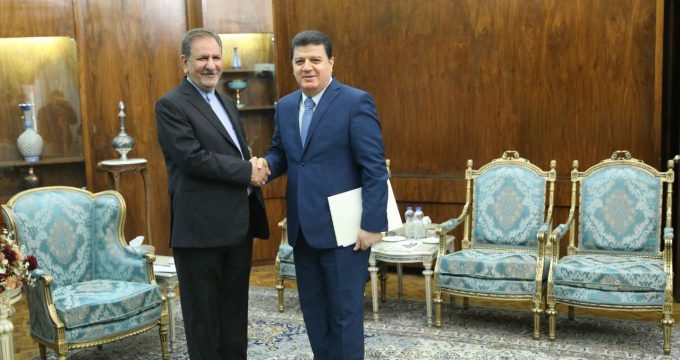 IRNA – Iran’s First Vice-President Eshaq Jahangiri said on Wednesday that Iran will stand by the Syrian government and nation in the reconstruction time.

Speaking during a meeting with Syrian ambassador in Tehran Adnan Mahmoud, the Iranian vice-president congratulated the recent victories of the Syrian forces in the fight against terrorist groups, wishing further achievements for the Syrian government and nation.

He said that the Iranian private sector will also contribute to reconstruction of Syria.

Referring to his upcoming visit to Damascus, Jahangiri said that the visit can leave constructive effects on further expansion of political and economic relations between the two nations.

The Syrian ambassador, for his part, said that his country seeks to bolster strategic relations with Iran.

Mahmoud said that the Syrian victories in pushing back the terrorists are joint achievements for both Iran and Syria.

He voiced his country’s willingness for Iran’s partnership in all stages of Syria reconstruction.