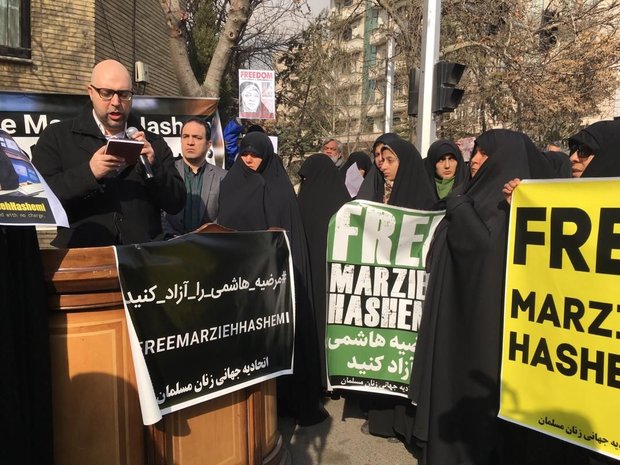 MNA – Iranian students, journalists and people from different walks of life are holding a demonstration in front of the Swiss Embassy in Tehran, which handles the US consular affairs in Iran, to protest the illegal detention of a US-born anchor working for Iran’s Press TV by the US authorities.

The protestors have staged the rally to show their anger towards the United States administration for illegally detaining Marzieh Hashemi, an Iranian-American anchorwoman who works for the Tehran-based English-language news channel Press TV.

Marzieh Hashemi, who was born in the US as Melanie Franklin, was detained upon arrival at St. Louis Lambert International Airport in St. Louis, Missouri, on Sunday, as a material witness in an unspecified investigation.

Her arrest has drawn condemnation and criticism from the highest levels of the Iranian and foreign officials, including Foreign Minister Mohammad Javad Zarif, Iranian Parliament Speaker Ali Larijani, Iran’s Ministry of Justice, and Hezbollah.