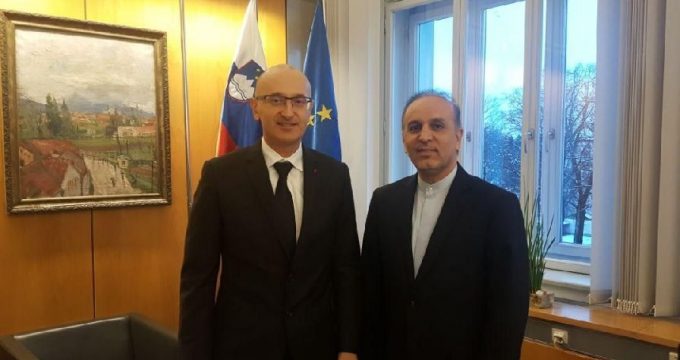 Bozic made the remarks on Friday in a meeting with the Iranian ambassador to Ljubljana Kazem Shafeie.

Describing as good the existing level of trade relations between Iran and Slovenia, he underlined the need for further development of bilateral cooperation.

During the meeting, Shafeie too referred to capacities and opportunities between the two countries for promoting relations, saying sustaining previous cooperation will pave the way for broadening relations in the future.

Elsewhere in his remarks, the Iranian envoy appreciated Slovenian government’s logical stance on the JCPOA and the US withdrawal from the deal.

The US President Trump announced on May 8, 2018 the withdrawal from the JCPOA, which was met with disapproval of other parties to the 2015 agreement and their emphasis to stay in the landmark international deal.

Expressing happiness over increasing trend of trade exchanges between Iran and Slovenia, Shafeie noted that the latest statistics show a 23 percent growth in the past nine months of the current Iranian calendar year (started on March 21, 2018).

He also voiced Iran’s readiness for holding the first joint economic commission between Iran and Slovenia in the near future.