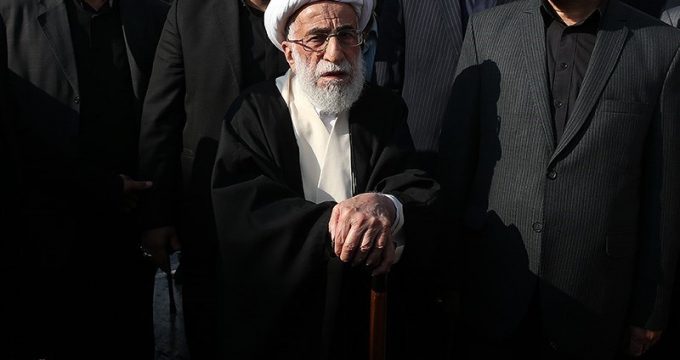 Press TV – A senior Iranian cleric has censured Europe for dragging its feet in adopting practical measures to save the 2015 multilateral nuclear agreement following the US’s withdrawal, saying he thinks the Islamic Republic will ultimately have to “set fire” to the deal if the trend continues.

“Some imagine they could rely on the Europeans when the US withdraws from the JCPOA,” Ayatollah Ahmad Jannati, head of Iran’s Assembly of Experts, said on Thursday, using an acronym for the Joint Comprehensive Plan of Action, the official name of the nuclear accord.

He further complained that the officials failed to respect statements by Leader of the Islamic Revolution Ayatollah Seyyed Ali Khamenei in June 2016, which came in response to US threats back then to withdraw from the Iran deal.

The Leader had said in June 2016, “Of course, the individuals who have run for the US presidency are constantly threatening that they will tear it up. Well, if they tear it up, we will set it on fire!”

In May 2018, US President Donald Trump unilaterally withdrew his country from the JCPOA in defiance of objections from the entire international community.

Today is the 3rd anniversary of the implementation of Iran nuclear deal which displayed how untrustworthy and unreliable the US is. A president sign, the next withdraw! Thank you President Trump for exhibiting this. Shame!

In response, Iran’s other partners in the deal, especially Washington’s own allies, stressed their commitment to the deal and vowed efforts to compensate for the US’s absence and keep the deal in effort.

In turn, Iran also said it would only stay in the deal if the Europeans manage to make sure Tehran will be able to collect the economic dividends of the JCPOA when the US leaves and unleashes fresh economic pressure against the Islamic Republic.

Ayatollah Khamenei said following Washington’s exit that “the European sides are obligated to provide necessary guarantees with regard to the JCPOA, but the country’s economy must not be tied to this issue.”

Jannati’s comments come amid efforts by the European Union to set up the so-called Special Purpose Vehicle (SPV), a payment mechanism aimed at facilitating business with Iran irrespective of the US bans.

The 28-nation bloc has come under fire for failing to speed up efforts to launch the SPV, which many analysts view a question of sovereignty for Europe in the face of the US.

Last month, Iranian Foreign Minister Mohammad Javad Zarif said Tehran would not stand by for Europeans to fulfill their commitments.

He also emphasized that the Islamic Republic has many option to deal with the US withdrawal from the JCPOA and would consider them based on its national interests.

Additionally, Iranian Deputy Foreign Minister for Political Affairs Seyyed Abbas Araqchi complained that European countries’ political support for the JCPOA is “valuable,” but not enough, urging them to take “operational steps” to safeguard the nuclear accord.