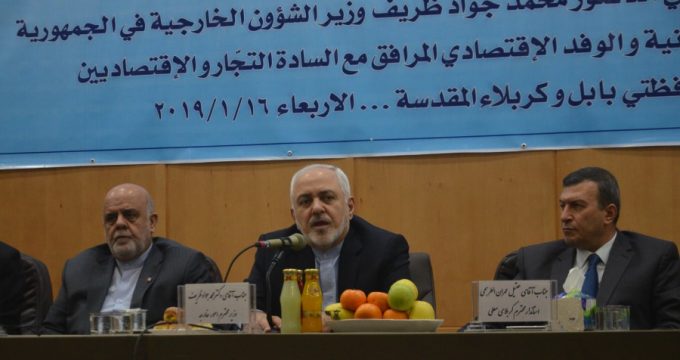 Iraq, Syria defeated Daesh, US had no role: Zarif

IRNA – Iran’s foreign minister said on Wednesday it was the Iraqi and Syrian people who defeated the Daesh (ISIS) Takfiri terrorist group and the United States had no role in the issue.

Mohammad Javad Zarif made the remarks at Iran-Iraq Joint Trade Conference held in the Iraqi city of Karbala on Wednesday morning with businessmen and officials from the two countries in attendance.

He wondered why the US cannot make any achievement in combating terrorism in other parts of the world and said victory over Daesh in these two countries was due to the struggles of Iraqi and Syrian people who put their life on the line.

Elsewhere in his remarks, the top Iranian diplomat noted if barriers are removed, the volume of trade exchanges between the two countries will exceed the current level.

Zarif noted Iran is ready to reduce tariffs to zero.

He went on to say the US has no right to form boundaries between the two neighboring countries.