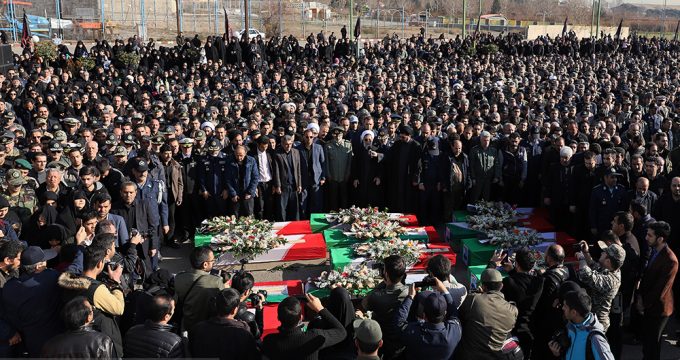 IRNA – A funeral procession was held in Tehran on Wednesday to bid adieu to the 13 Iranian army personnel killed in the crash of a Boeing 707 cargo plane on Monday.

Several Iranian army commanders as well as senior officials were present at the funeral ceremony held for the victims of the plane which crashed near an airport in the city of Karaj west of Tehran.

The Boeing 707 cargo plane, carrying meat from Bishkek, Kyrgyzstan, mistakenly landed in Fath Airport and crashed and caught fire near the airport on Monday morning.

Only one out of the 16 people on board survived the crash and is in hospital.

In a meantime, Supreme Leader of the Islamic Revolution Ayatollah Seyyed Ali Khamenei on Tuesday, sending a condolence message, urged the authorities to scrutinize the fatal incident and find and deal with any probable weaknesses and errors.

‘I sympathize with the bereaved families of the devoted members of Iran’s Army who lost their lives in the tragic plane crash,’ wrote Ayatollah Khamenei in his message.

Praying to Allah for their forgiveness, he added, ‘It is necessary that the relevant authorities thoroughly scrutinize the sad incident and recognize and deal with the possible weaknesses, shortcomings and errors’.