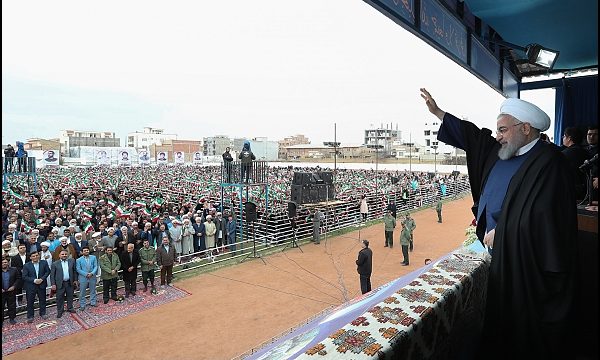 IRNA – Iranian President Hassan Rouhani described Iran’s relations with its neighbors as being at the best level and said Tehran is ready for fresh friendly ties with one or two more regional countries.

The President made the remarks on Monday while addressing people who had gathered in a stadium in this northeastern city to welcome Rouhani to their city.

Though certain countries are presently seeking to impose restrictions on Iran’s access to food, medicine and some equipment, he said, Iran is presently proud of its high level of security which is due to the nation’s vigilance and scientific achievements.

Elobarating on some of country’s scientific achievement, the president said Iran is to launch two indigenous satellites in coming days.

According to Rouhani, one of them , dubbed Payam (Message), is the first home-made operational satellite and will be used for processing the terrestrial data about the country on a daily basis.

Elsewhere in his speech, President Rouhani also pointed to enemies’ plots against the country, stressing that Iran did not fear them and would easily overcome the problems.

“US and its regional hands are not capable of bringing the great Iranian nation to the knees,” he added.

President Rouhani accompanied by a number of his cabinet members arrived in Golestan province this morning. During his two-day stay in the province , he will review the process of development in the province and the get familiar with problems provincial people are facing.

He will also hold meetings with the Sunni Ulema and provincial clerics and inaugurate a number of development projects.