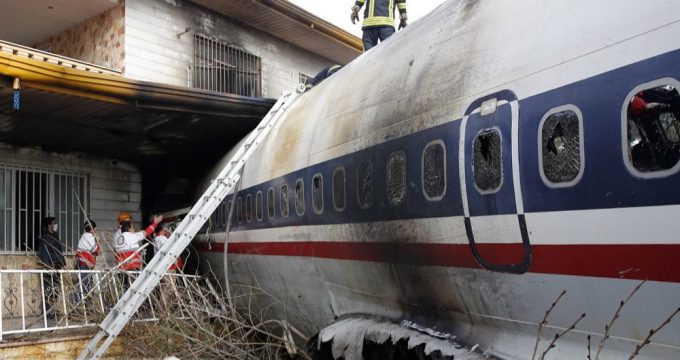 Everything about cargo plane crash near Tehran

January 14, The Iran Project – On Monday (Jan. 14), a Boeing 707 cargo plane with 16 crew on board flying from the Central Asian nation of Kyrgyzstan has crashed and caught fire while attempting to land in the wrong airport, Fath Airport, located in Karaj, Alborz province, 40 kilometers west of the capital Tehran.

The head of Iran’s emergency department, Pirhossein Kolivand, announced that the crash has claimed the lives of 15 people on board. Flight engineer survived the tragic event but is in critical condition in the hospital.

He went on to say that ten of the bodies transferred to Forensic Medicine Organization have already been identified while work is going on to identify the rest, while adding from among the ten bodies identified, one belongs to a woman.

Initial reports suggested that the Boeing 707, a four-engine jet airliner built by Boeing Commercial Airplanes, was due to arrive at Karaj’s Payam Airport but the pilot took the plane to the Fath airfield by mistake, which is not suited for large cargo aircraft.

Then the pilot lost control of the plane, ran out of the runway and hit the walls that separate the airport from neighboring residential areas. There have been reports of damage to some residential facilities which were empty at the time of the incident.

Other reports suggested that the doomed cargo plane’s black box had been found near the crash site.

The Public Relation Office of the Iranian Army in a statement notified that the crashed plane was carrying meat from Bishkek, Kyrgyzstan.

At first, Iran’s media announced the plane belonged to Kyrgyzstan, but later said it belonged to Iran’s Payam airline.

Also, the Kyrgyz Foreign Ministry said in a statement that it will launch a probe into the crash of the Iranian cargo plane near the capital Tehran.

The Bishkek administration is investigating the issue to determine if any Kyrgyz citizens had been on board, the statement said.