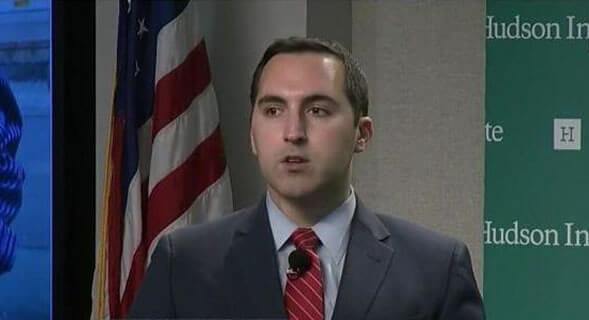 Asharq Al-awsat English – One of Washington’s most vocal critics of the 2015 Iran nuclear deal has joined the Trump administration in a senior policy role, according to several sources in Washington.

Richard Goldberg will become Director for Countering Iranian Weapons of Mass Destruction (WMD) at the National Security Council, and he will work closely with Brian Hook, US Special Representative for Iran and Senior Policy Advisor to the Secretary of State.

Goldberg is a leading analyst at the Foundation for Defense of Democracies (FDD), a Washington-based think tank chaired by Mark Dubowitz.

Goldberg has experience in legislative work between the years 2004 and 2014. He previously served as foreign policy advisor for Illinois Republican Senator Mark Kirk. At that time, he led bills supporting Israel, as well as discussing sanctions against Iran.

During his tenure as chief of staff at the office of Senator Kirk, Goldberg led a major effort to remove Iran from the SWIFT system.

The Obama administration opposed it at the time, but the Congress unanimously passed the legislation in 2012, and by 2013 that action was activated.

From 2015 to 2017 he served as Chief of Legislative Affairs for Illinois Gov. Bruce Rauner. In 2013 he played a major role in the Republican campaign in Congress to oppose President Barack Obama’s nomination of Republican Senator Chuck Hagel as defense minister.

Goldberg has a strong friendship with FDD’s President and together they worked over the past years to promote sanctions against Iran’s Central Bank and impose sanctions on entire sectors of the Iranian economy.

Since joining the Foundation, Goldberg has been a strong advocate of a US military action against Iran. In February 2018, Goldberg urged Trump’s administration to “re-establish a robust military deterrent toward Iranian expansionism in close collaboration with regional allies.”

He recommended that the US “should target key Guards’ bases and weapons in Syria accordingly. Such an approach could help prevent a larger-scale conflict.”

In one of the articles, Goldberg called for opportunities for sanctions on the Iranian media, pointing out that state media is an integral part of the circle of Supreme Leader Ali Khamenei

Goldberg’s views are in line with the positions and views of the Republicans in the administration, as well as that of John Bolton, National Security Adviser, in dealing with Iran and its nuclear threat.

He is one of the ideological activists who defend Israel at the Foundation for Defense of Democracies. It is noted that in one of his articles, he asked President Trump to limit the definition of Palestinian refugees to those who were displaced in 1948.

Richard Goldberg, US sanctions against Iran, Weapons of Mass Destruction (WMD) January 9, 2019
Iranian scholar: US had no way but to exempt Chabahar from sanctions
Turkey calls for joint control with Russia & Iran over US troop pullout from Syria