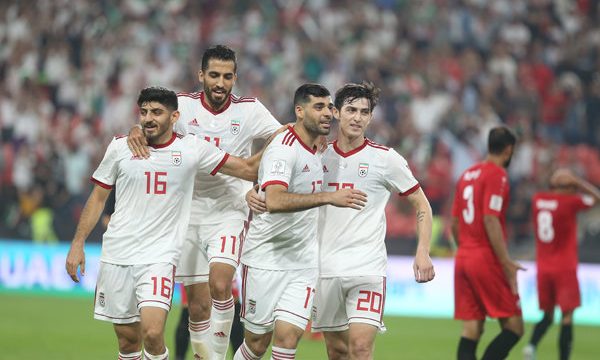 MNA – The Iran men’s national football team thrashed Yemen in its first match at the 17th edition of the Asian Cup underway in the UAE.

Iran, which is in Group D along with Yemen, Iraq and Vietnam at the 17th edition of the Asian Cup, began the competitions powerfully and secured a commanding win over Yemen in an easy match in Mohammad Bin Zayed Stadium in Abu Dhabi.

The first half of the match ended 3-0 for Iran, while the Iranian players were dominant throughout the game.

The Yemeni rival could not seriously threaten the Iranian team’s post at all throughout the match and it was the Iranian side that were completely dominant over the playing field.

The Iranian goalkeeper Alireza Beiranvand remained idle during the match and experienced the easiest match in years. During th esecond match, not only the Yemeni side could do nothing , but also received 2 more goals.

Iran is one of the main contenders at this edition of the Asian Cup along with Japan, South Korea, Australia and Saudi Arabia.

The Iranian national team, which is better known as Team Melli in Iran, will face Vietnam for their second match on January 12 again in Abu Dhabi but this time in Al Nahyan Stadium.

For the last match of group stage, Iran will take on Iraq on January 16 in Al Maktoum Stadium in Dubai.

The 2019 men’s AFC Asian Cupbegan on Saturday with a kick off between the host country United Arab Emirates (UAE), and Bahrain. The final match will be held on 1st February in Abu Dhabi’s Sheikh Zayed Stadium