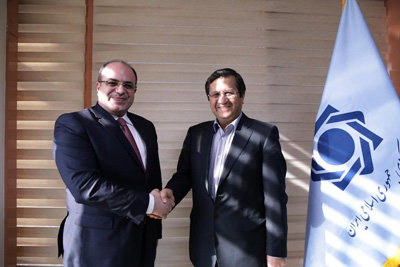 Tehran Times – In a meeting between Central Bank of Iran (CBI) Governor Abdolnaser Hemmati and Syrian Minister of Economy and Foreign Trade Mohammad Samer al-Khalil in Tehran on Monday, the two sides investigated the ways to facilitate banking transactions between Iran and Syria, CBI website published.

As reported, establishment of a joint bank was one of the issues discussed in this due.

In the meeting, Hemmati said that expansion of banking ties between the two counties is a precondition for boosting bilateral trade which has come under the spotlight in the agreement the two sides signed on Sunday for expanding bilateral economic cooperation in the long term.

The agreement was signed by Iranian Transport and Urban Development Minister Mohammad Eslami and Samer al-Khalil at the place of Iran Chamber of Commerce, Industries, Mines and Agriculture (ICCIMA).

The Syrian minister, for his part, underlined the important role of the central banks of the two countries to facilitate trade ties in line with materializing the objectives of the agreement.