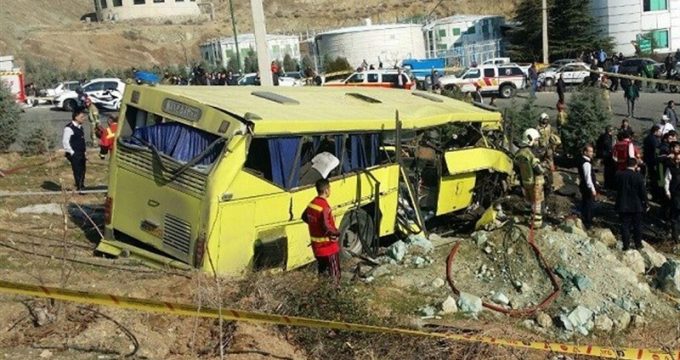 December 31, The Iran Project – Investigations are still underway following 10 were killed and 27 others injured as a bus carrying students overturned last week (Dec. 25) on the campus of Islamic Azad University’s Science and Research Branch in Tehran, nestling in the foothills of the Alborz Mountains.

According to a report by the official website of the Iranian Presidency, the Council of Ministers convened on Sunday (Dec. 30) in a session that was chaired by President Hassan Rouhani and discussed the causes of the tragic bus accident.

During the meeting, the ministries of ‘Science, Research and Technology’, and ‘Interior’ submitted a report on the causes of the accident that happened inside the campus.

President Rouhani tasked the ministries of ‘Science, Research and Technology’, and ‘Interior’, and the Vice-Presidency for Science and Technology Affairs to form a committee for investigating the causes of the accident, and carry out the necessary measures to prevent such accidents from happening again.

“It is necessary that the parliament’s Education and Research Commission fully pursue this issue and submit the results (of their probe) to the parliament,” he said, adding that all individuals who are to blame should be identified.

In a message, Ayatollah Amoli Larijani said, “The bitter and tragic incident necessitates the attention of the relevant authorities more than ever.”

Despite the taken measures, hundreds of students of Iran’s Azad University have protested and demanded the resignation of university officials.

University officials initially blamed the crash on the driver having a stroke. The coroner’s office later denied that claim.

Many students and others have instead pointed to the university’s aging bus fleet and poor maintenance and have demanded new vehicles be purchased.