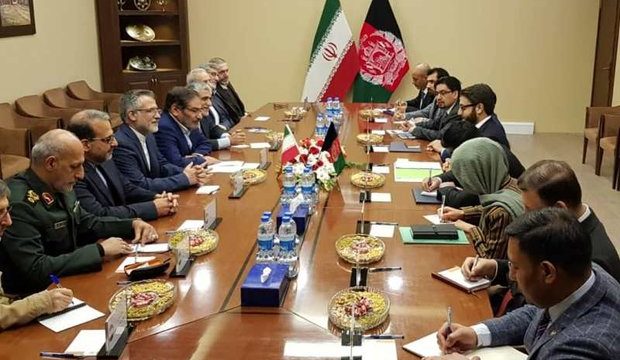 December 27, The Iran Project – Secretary of the Supreme National Security Council Rear Admiral Ali Shamkhani,  accompanied by a number of high-ranking security, military and political officials,  arrived in the Afghan capital Kabul on Wednesday (Dec. 26)  for a one-day state visit.

Reviewing ways to expand bilateral ties in political, economic and security sectors, combating terrorism and organized crime, as well as joint border and regional cooperation were among the key objectives of Shamkhani to Afghanistan.

In a meeting with  Hamdullah Mohib, the top Iranian security official said Iran would continue talks with the Taliban to help settle the current security issues in the neighboing country Afghanistan.

“The Afghan government is informed about the process of talks which Tehran intends to continue,” said Shamkhani, referring to the ongoing talks between Iran and the Taliban.

He also voiced support for the holding of the second regional meeting in Kabul, expressing hope that the participation of effective countries in the meeting would lead to more unity and cooperation in the fight against terrorism and extremism.

The Afghan security adviser, for his part, described Iran as one of the main pillars of security in the region, voicing confidence that joint cooperation between Tehran and Kabul would greatly contribute to the resolution of the current security issues in Afghanistan.

He further hoped that Shamkhani’s visit would facilitate the finalization of political, defense, security and economic documents of cooperation, preparing them to be signed by the presidents of the two countries.

Talking to President Ghani, Shamkhani stated that the enemies are seeking to destabilize the shared borders between Iran and Afghanistan in an organized way in support of Takfiri terrorism in the neighboring country.

He said in the meeting that strengthening and expansion of all-out relations with neighboring countries is one of the unchangeable principles of Iranian foreign policy, adding “deep religious, cultural and historical ties between the two nations have created significant potentials for the development of relations based on the mutual interests.”

The Iranian official further noted that Iran considers Afghanistan’s security as its own security, calling for accelerating the process of finalizing and signing the comprehensive document of bilateral relations.

hamkhani went on to describe the withdrawal of US troops from Afghanistan as a golden opportunity for the country to strengthen its defense and military capabilities with relying on its domestic and regional capacities, adding, “The nations of the region look forward to seeing complete withdrawal of US troops, whose presence has had no results but war and insecurity.”

In turn, the Afghan president stressed the need to create joint and active mechanisms between the intelligence and security agencies of the two countries to increase capability in ​​countering terrorism, organized crime and to fight against drug trafficking.

Sustainable security at the common borders is a main priority for Afghanistan, Ghani said, pointing to Afghan government’s long-term strategic relations with Iran.

He further stressed that the improvement of trade-economic capacities, especially in the area of goods transit, trade and border exchanges, ensures the formation of stable relations based on the long-term interests of the two countries.

In a meeting with  Abdullah, Shamkhani said the US strategy in the region is permanent domination with the maximum looting and minimal cost, underlining that the launch of the proxy wars and the creation of Takfiri terrorist group are planned in this ground.

He called for increased level of cooperation in all areas, given the importance of Iran-Afghanistan relations to the interests of the two countries and the security and stability of the region.

Declaring the Islamic Republic of Iran’s support for the peace process in Afghanistan with an inter-Afghan approach, the SNSC Secretary considered any act contrary to this process to be detrimental to the security and stability of Afghanistan.

The Afghan Chief Executive also welcomed the constructive engagement of the two countries’ security institutions, saying, ‘The most important challenge for Afghanistan today is the existence of a worrying security challenge and the overcoming of this situation requires the cooperation and constructive efforts of the neighbors to stabilize and secure Afghanistan.’

Referring to the efforts of known terrorist groups in Afghanistan to use the means of violence and bloodshed in order to impose their will on the legal government of the country, he noted, Afghan parliamentary elections showed that the political will of our people should only be through ballot boxes without pressure and terrorist threats.

During a meeting with Hamid Karzai, Shamkhani described as suspicious US decision to transfer remaining of Daesh terrorists to Afghanistan.

He referred to US dual behavior as regard fighting terrorism, saying the US presence in the region is one of the main factors of instability and insecurity in the region.