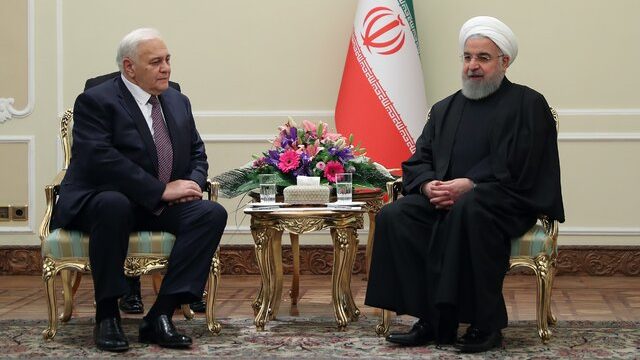 December 26, The Iran Project – Chairman of Azerbaijan National Assembly Ogtay Asadov, at the head of a delegation, arrived in the capital Tehran on Tuesday (Dec. 25), and held talks with senior Iranian officials on a host of issues including the development prospects of bilateral cooperation, as well as security issues.

He also described cooperation in different fields such as industry, pharmaceuticals and science and technology developing and said, “Iran and the Azerbaijan Republic took an important decision for using energy resources in Caspian Sea”.

On the cooperation between the two countries in construction of North-South Corridor, Dr. Rouhani said, “With full implementation of the North-South Corridor, the Sea of Oman and the Indian Ocean will be connected to the Azerbaijan Republic, Russia, the Black Sea, and Eastern and Northern Europe.”

In turn, Asadov said, “The Presidents of the two countries are determined to further cement relations and cooperation”.

Zarif further expressed hope that through the implementation of joint projects and the use of the capacity of the transport corridors between the two countries, Tehran and Baku would further advance the relations in the economic and commercial fields.

Ogtay Asadov, for his part, said that the two countries share many significant historical, cultural and geographical similarities.

Asadov also pointed to the North-South Corridor project, which passes through Iran and Azerbaijan and can benefit both much, stressing the need for accelerating its implementation.

In talks with the Azeri official, Shamkhani described the huge amount of cultural, civilized, religious, linguistic and ethnic commonalities between Iran and Azerbaijan as a unique asset for development and expansion of relations that could benefit the region.

The top security official pointed to the efforts and actions of some countries opposing friendly relations between the two countries in order to strike at the strong ties between Tehran and Baku and added, “The security of the countries of the region is collectively secured by adopting common approaches and holding talks as well as close interactions.”

Ali Larijani, during talks with the Azeri speaker, attached great importance to the development of comprehensive ties between Tehran and Baku, especially in the economic sector, touching upon the friendly relations between the two neighbors.

During the meeting, the two sides also discussed ways of facilitating border interactions and accelerating the implementation of mutual agreements.

Ali Larijani, Iran-Azerbaijan relations, North-South Corridor, Ogtay Asadov December 26, 2018
Turkey stands firmly against US sanctions on Iran
Erdogan gets his wish from Trump in Syria, but now what?