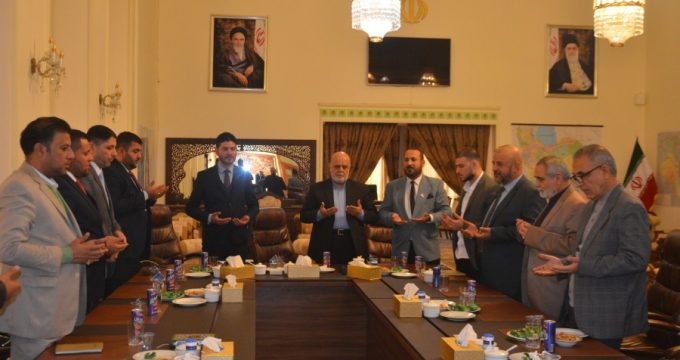 Envoy: Iran’s friendship with Iraq not limited to Shias

IRNA – Iranian Ambassador to Baghdad emphasized that Iran’s friendship with Iraq is not limited to Shias, and limiting the support of Iraqi people and government by Iran just to protect and have close relation to Al-Hashd al-Sha’abi (Popular Forces) is false.

In a warm-hearted conversation with the Iraqi activists at a joint meeting with a number of Iraqi journalists and writers at the Iranian embassy in Baghdad, Ambassador Iraj Masjedi, said, ‘Some groups who are opposing friendship and fraternity between Iran and Iraq propagate that Iran only supports Shia groups and Al-Hashd al-Sha’abi while this is totally pardoxical, and good friendship and mutual respect are not specific to Al-Hashd al-Sha’abi.

He added, ‘The policy of the Islamic Republic of Iran is to establish, maintain and promote good, brotherly relations and close cooperation with all groups and tribes of Iraq as a neighboring country with a great deal of historical and cultural connectivity, as well as a 1,400-kilometer borderline. Accordingly, we have a great connection with Shias, Sunnis, Kurds and other ethnicities and minorities in Iraq.’

He said, ‘What the Islamic Republic of Iran wants from Iraq, and the opinion of the Supreme Leader of the Islamic Revolution is the same, is an independent, secure, integrated and united Iraq among different groups and tribes’.

Masjedi added that it is clear that Iran, as a neighbor with a 1,400-kilometer border with Iraq, wants to be a safe, integrated, strong country with peace and prosperity, and that Shias, Sunnis and Iraqi Kurds are not against each other and of course this country is a good neighbor and brother for Iran.