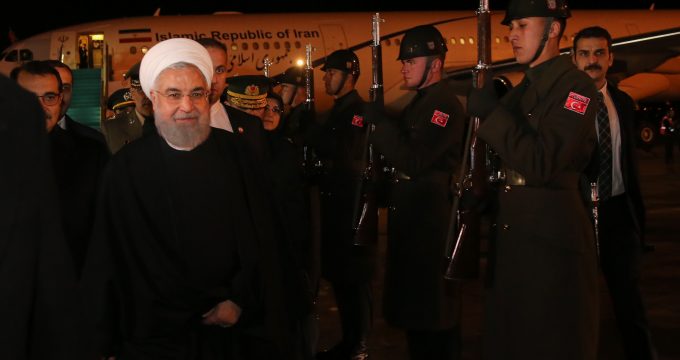 MNA – Iranian President Hassan Rouhani arrived in the Turkish capital of Ankara on Wednesday at the official invitation of the President of Turkey Recep Tayyip Erdoğan at the head of a high-ranking political and economic delegation.

President Rouhani arrived in Ankara on Wednesday afternoon to attend the 5th Meeting of High Council for Iran-Turkey Strategic Cooperation. Rouhani is accompanied by a high-ranking political and economic delegation on the two-day visit.

Upon his arrival at Ankara airport, the Iranian president and his accompanying delegation were welcomed and greeted by some high-ranking Turkish officials.

While at Tehran Mehrabad airport before leaving for Ankara, Rouhani said that the visit is taking place at the official invitation of the President of Turkey and he will have a bilateral meeting with his Turkish counterpart Recep Tayyip Erdoğan. He added that the ministers accompanying him will also hold meetings with their Turkish counterparts.

Rouhani also said that bilateral, regional, global and international issues will be discussed during the meetings while majority of negotiations and bilateral meetings will focus on economic cooperation between the two countries, banking and commercial relations, energy, oil and gas.

The Iranian delegation will leave Ankara for Tehran late on Thursday.

The High Council for Iran-Turkey Strategic Cooperation was the result of Rouhani’s first visit to Turkey during his first term in power as the Iranian president. The presidents of the Islamic Republic of Iran and Turkey intend to increase bilteral trade to $ 30 billion target.