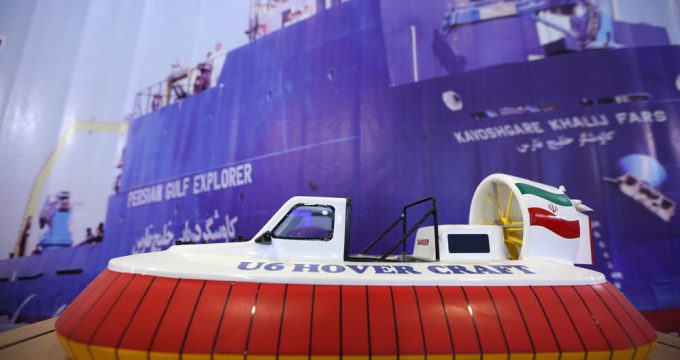 Some 240 domestic and foreign guests demonstrated their latest products and services at the international exhibition to create investment opportunities, demonstrate latest industrial achievements, naval, port and off-shore facilities and installations.

The exhibition showcases latest achievements in the field of marine industries including BLDC-electric thrusters and diving chambers.

Speaking to reporters on the sidelines of the event, head of Marine Industries Organization of the Ministry of Defense and Armed Forces Logistics, Rear Admiral Amir Rastegari said various types of Brushless DC electric motor (BLDC) thrusters have been unveiled and put on display at the exhibition.

He said the motors do not have carbon brushes, and enjoy 30% less energy consumption, are easier to repair, have lower noise, and extensive applications.

According to him, the motors can be used in electric motorcycles, electric bicycles, evaporative coolers, and washing machines.

Other achievements on display in the exhibition are a new version of a two-man diver propulsion vehicle that, according to Rastegari, can carry divers for military or non-military tasks, such as repairing pipes or planting cables underwater.

A diving chamber has also been unveiled at the exhibition, which can carry six crew. Rastegari noted that the chamber has been designed and constructed according to latest technologies to facilitate diving and ensure the well-being of divers.

In the margins of the exhibition, Khanzadi said Iran sees no limits to its marine developments and that the country has reached the peak of its defensive authority.

sked about plans to combat US sanctions, the commander noted that Iran’s defense sector has been faced with the most severe sanctions from the beginning of the Islamic Revolution, adding, “this is not a new issue for us.”