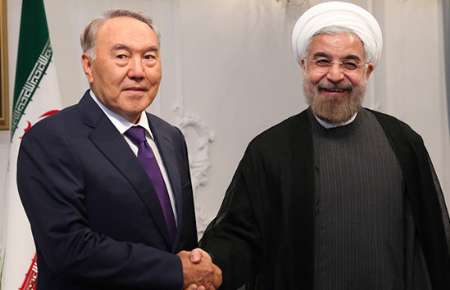 Tasnim – In a congratulatory message to Kazakhstan on its National Day, Iranian President Hassan Rouhani called for constant consultations between Tehran and Astana to contribute to regional security and Islamic unity.

In a letter to his Kazakh counterpart Nursultan Nazarbayev on Sunday, Rouhani congratulated Kazakhstan’s government and people on the anniversary of the Central Asian country’s independence.

Hailing the growing ties between Iran and Kazakhstan in line with the mutual interests, the Iranian president hoped for closer interaction in light of the two nations’ past experiences.

“The Islamic Republic of Iran and the Republic of Kazakhstan have common responsibilities and interests for strengthening regional stability and security as well as Islamic solidarity,” Rouhani added, stressing the need for constant bilateral consultations to that end.

Kazakhstan’s Day of Independence is celebrated annually on December 16.

Kazakhstan was the last of the Soviet republics to declare independence following the dissolution of the Soviet Union in 1991. The current president, Nursultan Nazarbayev, has been leader of the country ever since.