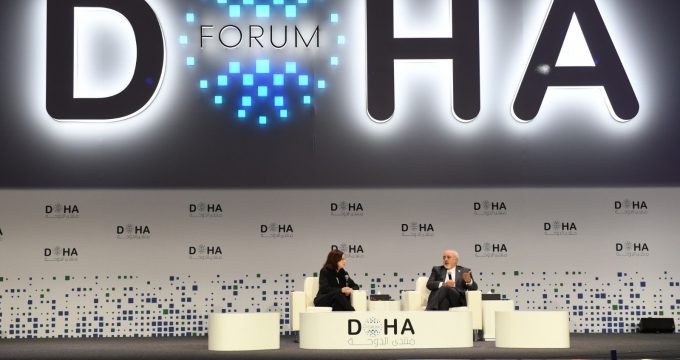 Iran can teach ‘art of evading sanctions’ to others: Zarif

MNA – Iranian Foreign Minister Mohammad Javad Zarif says Iran will not change its policies under the US sanctions, adding that the country can teach the ‘art of evading sanctions’ to others for a price.

“Trump has called for negotiations despite his hostile policies, and we have responded to him that if he was joking,” the Iranian Foreign Minister Mohammad Javad Zarif said while addressing the 18th edition of Doha Forum in the Qatari capital on Saturday.

“Iran used to be ready for direct talks with the United States, and we did it, and I spent a lot of time talking with former US Secretary of State John Kerry, the result of which was the nuclear deal, from which Donald Trump pulled out,” the Iranian top diplomat added.

He further criticized the US interventionist policy in the region saying that it is America that intervenes in the region while the deployment of Iranian forces has taken place at the request of the governments of the hosting countries.

Zarif added “as long as our national interests are met and the European Union complies with its obligations, we will remain committed to the nuclear deal.”

According to the Twitter account of the Doha Forum, Zarif underlined that Iran will not change its policies under the US sanctions. “If there is an art we have perfected in Iran — and we can teach it to others for a price — it is the art of evading sanctions,” he noted.

With regard to the crisis in Yemen, the foreign minister added “Iran has not provided weapons to the Houthis (Ansarullah’s movement) in Yemen, but the Houthis are using the weapons that they received from Saudi Arabia during the term of Ali Abdullah Saleh.”

He further expressed hope that that recent agreement in Sweden on the Yemeni crisis would put an end to the suffering of the people of the war-torn country.

Saudi Arabia and the United Arab Emirates with imported weapons from the United States and Britain have turned Yemen into hell, the Iranian top diplomat said, adding tens of thousands of people were directly killed in airstrikes carried out by Saudi-led coalition while one million more people have been infected by cholera.

Zarif continued “we will continue to sell oil and engage with the international community, and the ones who abandoned engagement with us will be the losers.”

He expressed regret over the Saudi government policies, saying “it is upsetting that the Saudis think that their interests are in intensifying tensions in relations with other countries,” said Zarif, adding that Saudis think they can “get away with murder.”