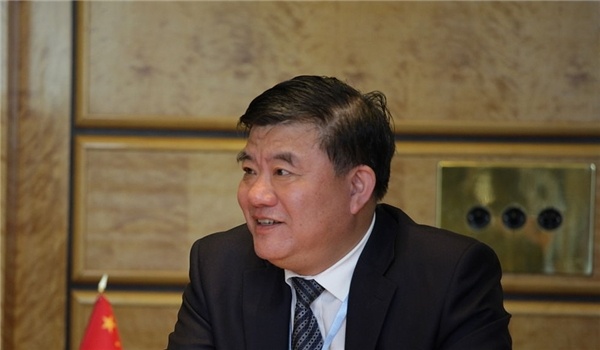 FNA – China condemns and is opposed to all terrorist attacks, said Vice Chairman of the Standing Committee of China’s National People’s Congress Chen Zhu in Tehran on Saturday, adding that countering terrorism is a universal task not to be successfully delivered on by a single country.

Unity is needed to fight against terrorism, stressing the importance of countering terrorism together, said Chen Zhu, who is in Tehran, attending the 2nd Speakers’ Conference with participation of Iran, China, Russia, Afghanistan, Pakistan and Turkey.

Chen made the remarks while referring to Thursday suicide attack on police headquarters in Chabahar, southeastern Iran, and assault on China’s Consulate in Pakistan.

He further urged the six countries in the Tehran conference to share the related successful experiences and draw up common strategies for combating terrorist networks.

More regulations should be made on counter-terrorism moves, Chen stressed.

Touching upon the economic cooperation between the six countries, the Chinese official called for further economic relations in order to create new opportunities for fostering multilateral and bilateral ties.

The 2nd Speakers’ Conference in Tehran focuses on the Challenges of Terrorism and Inter-Regional Connectivity.

In the first round of the conference which took place last year in Islamabad the parliament speakers of Iran, Pakistan, Turkey, China, Russia and Afghanistan decided to enhance regional counter-terrorism cooperation.

Earlier on November 20, Iranian President Hassan Rouhani described his country as a pioneering state in combating terrorism, and said Iran, which is one of the victims of the weapons of mass destruction, is a major opponent of such weapons in the world.

President Rouhani made the remarks on Wednesday speaking at the regular weekly cabinet session in Tehran.

Stating that the Islamic Republic of Iran is the pioneer of fighting terrorism, he said, “Iran is the biggest victim of aggression, terrorism, and the use of weapons of mass destruction.”

Rouhani highlighted that Iran’s past experience in being victimized by the use of weapons of mass destruction is one of the reasons that now it is “the major state in fighting WMDs”.

He added, “Today, we should be –and are- the top country in not letting terrorists take advantage of different financial systems for transferring money.”

Iran has announced in numerous occasions that it welcomes bilateral and multilateral cooperation on combatting terrorism in the world, and it has been the major supporter of Iraqi and Syrian governments in their campaign against the ISIL and similar terrorist groups.

On Sunday, Iraqi President Barham Salih who was visiting Tehran at athe head of a senior Iraqi delegation met with Iranian Supreme Leader Ayatollah Seyed Ali Khamenei and appreciated Tehran’s assistance to Baghdad in the fight against terrorist groups, adding, “Iran played a huge role in defeating terrorism through its supports (for Iraq).”

On last Monday, Special Assistant to Iran’s Foreign Minister in Political Affairs Hossein Jaberi Ansari and Syrian President Bashar al-Assad met in Damascus and the two sides vowed to keep up their mutual cooperation on fighting terrorist and extremist groups.

Iran and Syria have pledged to keep counter-terrorism cooperation and to counter US bids to revive terrorists and create obstacles to prolong the war in the Arab country.

Jaberi Ansari and President Assad reiterated the importance of Syrian-Iranian relations as a factor of stability.

The two sides reaffirmed both nations’ determination to continue combating terrorist groups operating across the region.

They also underlined the need for a political settlement as the sole solution to the Syrian crisis. They also vowed to resist any pressure by the United States, which is attempting after its failure to revive terrorists to topple the government in Damascus.

Iran has been offering military advisory support to Syria at the request of the Damascus government, enabling its army to speed up its gains on various fronts against terror outfits.

However, over the past few years, Israel, the closest ally of the US has frequently attacked military targets inside Syria in an attempt to prop up terrorist groups that have been suffering defeats in the battle against Syrian government forces.

Also, Iranian Foreign Ministry Spokesman Bahram Qassemi voiced Tehran’s readiness to cooperate with the European countries in fighting terrorism and extremism, in his meeting with the Norwegian and Swedish ambassadors to Tehran, on November 05.