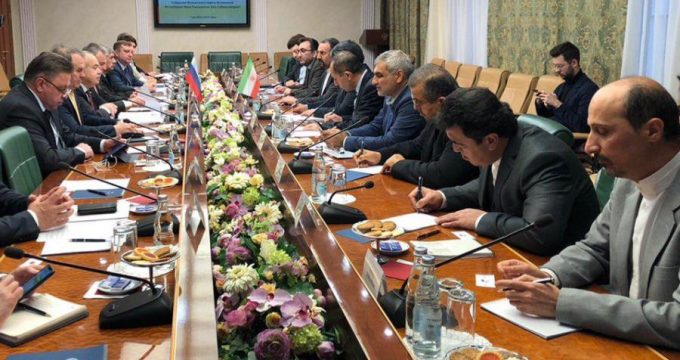 IRNA- The delegation of the Iranian and Russian parliamentary friendship led by Ramezan Ali Sobhanifar and deputy chairmen of the Federation Council of Russia Ilyas Magomed-Salamovich Umakhanov while meeting and discussing stressed the spread of cooperation in different fields.

The meeting, which was held at the venue of the Russian Federation Council and the presence of Iranian ambassador Mehdi Sanaie, Sobhanifar pointed out the obstacles that the enemies of Iran and Russia are making to prevent the spread of relations between the two countries, and added, ‘Iran and Russia have good cooperation in the region and able to eliminate terrorism and security threats in a joint strategy.’

The Iranian MP stressed the necessity for further synergy in resolving the obstacles in the development of cooperation, such as the use of national currencies, boosting trade exchanges and strengthening financial mechanisms, including measures that require more attention from the two countries.

‘In international forums, especially in regional issues, we should be more active and have closer cooperation,’ he added.

Umakhanov stressed the existence of the two countries’ common challenges in using capacities to deepen their relations.

He announced a 20 percent growth in trade and economic trade in the two countries over the past eight months and called for strengthening provincial cooperation between Iran and Russia.